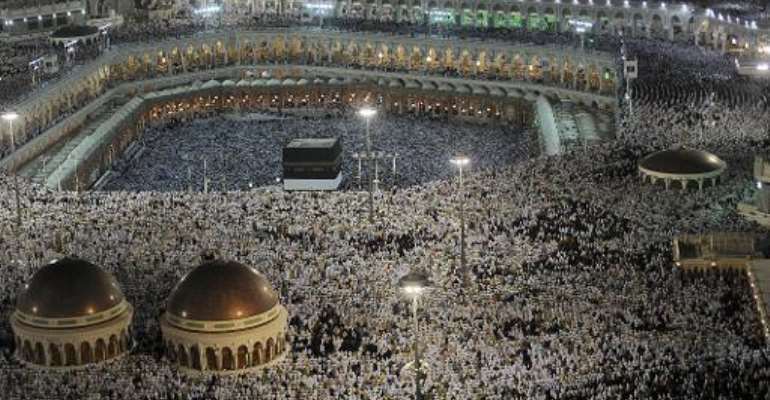 Muslim pilgrims perform their evening prayers, in Grand Mosque in the holy city of Mecca, on October 22, 2012. By Fayez Nureldine (AFP/File)

Tunis (AFP) - Fifty-four Tunisian pilgrims are refusing to leave Tunis airport and are demanding to be allowed to travel to Mecca after they were stopped with fake Gambian passports, members of the group said Friday.

Saudi Arabia allocates quotas to countries to limit the number of people making the annual Muslim pilgrimage, and there is a long waiting list in Tunisia, where such scams are relatively common.

The pilgrims, refusing to leave the airport's international zone since their papers were confiscated on Thursday, told AFP they had paid three Tunisian intermediaries thousands of euros for their Gambian passports and Saudi visas.

The interior ministry said the three suspects had been detained.

"These are not crooks... For three years people have travelled like this!" said one of the pilgrims, Jamil Taher Hmaoui, adding he had paid 8,000 dinars (4,000 euros) for his passport and visa.

"We are starting a sit-in (in the airport) and we will stay here until we leave for Saudi Arabia," the elderly man bellowed.

Mourad Ben Meriem, the cousin of another pilgrim, complained that "another group had left on Tuesday" without any problem, without saying where they had acquired their travel documents.

Around 10,000 Tunisians are allowed to travel to Mecca every year for the hajj, with the trip this year costing 16,000 dinars (8,000 euros) via official channels.

Photocopies of one of the fake passports, seen by AFP, show that it was issued in Banjul on September 12 under the name of a Tunisian woman born in 1950, with the Saudi visa also issued in the Gambian capital on September 17.

The Tunisian interior ministry could not be reached for comment on Friday evening, and the Saudi embassy was closed.

During the hajj pilgrimage, which all Muslims who are fit and can afford it must perform once, millions of worshippers travel from Mecca to Mina in western Saudi Arabia, and then on towards Mount Arafat.

It begins this year on October 13.