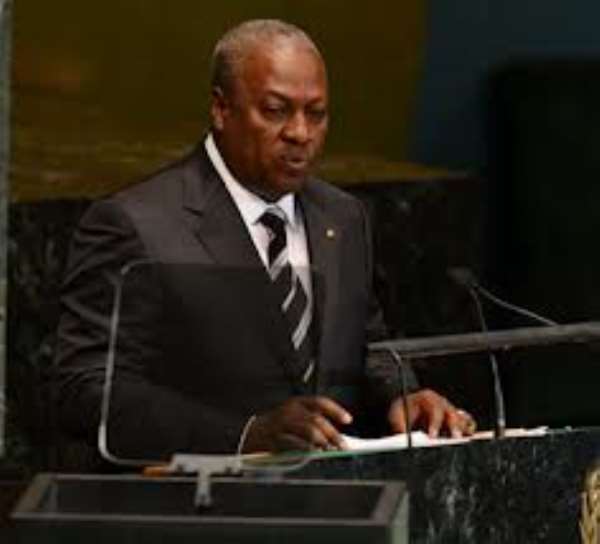 President John Mahama says neither the freedom attained at independence nor the absence of dictatorship in African countries today guarantees democracy.

What does, he says, is the willingness of individuals to take a stand in defence of that vision regardless of the consequences.

'These are the ideals that come together to form the vision. And that vision is what fuels democracy', he said in a lecture at the World Leaders Forum of the Colombia University in New York, one of America's Ivy League universities.

President Mahama is in the U.S. to attend the 68th session of the UN general Assembly and addressed the assembly on Thursday.

Tracing the collective desire by African countries for Independence, President Mahama said in 1957, Ghana became the first sub-Saharan nation in Africa to attain this feat after which it spearheaded a revolution on the continent.

Country after country followed, each one claiming its liberation from colonial rule. He recalled that it was a revolution that was led by visionaries, men and women who believed that the future they saw for their country was possible.

It was a goal well worth fighting for, a destination well worth marching towards, a dream for which they would sooner die than have deferred. He said the price these men and women, among them poets, professors, singers, lawyers, day labourers, the wealthy and the working class paid was steep.

'Nelson Mandela was jailed, as was Ngugi wa Thiong'o, Wole Soyinka and Fela Anikulapo Kuti. There were many who lost days, months and years of their lives in prison. There were also many who lost their lives entirely. Christopher Okigbo was killed, as was Patrice Lumumba, Steven Biko, Sylvanus Olympio and Eduardo Mondlane. Untold numbers of others fled into exile,' President Mahama recalled.

He said far too often, the collective battle for independence in Africa is mistaken for the struggle for freedom. But the independence of a nation does not guarantee the freedom of its people. And this was a significant hurdle that Africa needed to overcome as its many countries moved into self-rule, this belief that the revolution was over, that with independence they had arrived at their final destination, they had met the ultimate goal, the dream had been fully manifested into reality.

'Now, we know better. Decades of poverty, wars, despots and brain drain have taught us better, decades during which Africa seemed to have lost its way and lost sight of that vision. Decades which were just lost,' the President said.

According to him, more countries in Africa are today pursuing a vision to strengthen their democracy. This has resulted in great strides in many fields of endeavour on the continent leading to renewed interest in it by Europe, the Americas and Asia.

He, however, decried the fact that the closer many African nations get to the vision, and to the existence of that world in which so many have dared to believe, the more some see the system as a threat as is showcased by happenings in Mali, Somalia, Egypt and the tragic drama that is unfolding in Kenya.

'The world we live in today, with its laptops, smartphones and social media, is dramatically different from the world that existed in the late 1950s and 1960s. But the principles for which we fight remain the same. What also remains the same, is the hatred, greed, oppression, and the presence of individuals and groups who feel that their way is the only way.'

He added, 'For these individuals and groups, the prospect of peace undermines their plans for dictatorship. Empowered people are difficult to oppress. Educated people are aware of their rights.

'People whose only hunger is for the ability to rise to their highest potential will take a stand for justice and freedom,' he said. President Mahama reminded his audience that freedom is not given freely. It is not given at all. It must be won.

It must be claimed, and the price of the ticket is steep. He stressed that Africa's greatest resource is its people, a basic truth that 'we cannot afford to continue overlooking.'

The President said as a leader, it is his firm conviction that not only do people in a nation matter, they matter the most. The policies governments promote must therefore be for the betterment of the people's lives while legislation that is enacted must be for their protection.