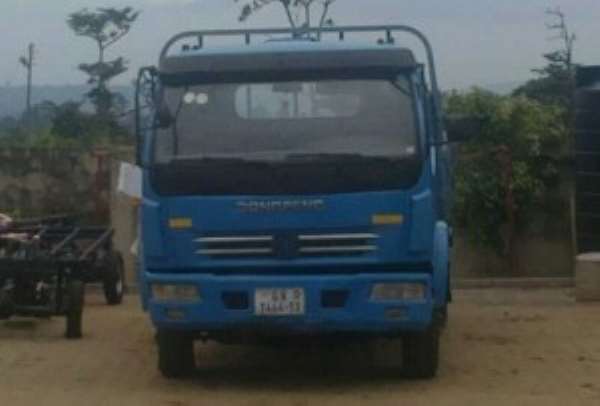 The Kwahu East District Chief Executive (DCE), Samuel Asamoah, has been caught in the web of scandal for allegedly hijacking and using a LESDEP truck supplied on hire purchase terms to the assembly for his private gains for several months.

His action has, therefore, incurred the wrath of some staff and assembly members in the district, who have planned to hit the streets of Abetifi to vehemently protest against the action.

But, Mr. Asamoah, in a telephone interview with The Chronicle , denied ever using the truck for his private gain, and noted that some mischievous hands were at work to undermine his hard-earned reputation.

The truck, a brand of DONGFENG with registration number GN 7464 11, was dispatched to the Kwahu East District Assembly in April 2012, at the instance of the Minister of Local Government and Rural Development to help boost entrepreneurship in the district.

The accompanying directive from the Minister to the DCE was to “allocate the truck to either an enterprise group or individual, whose business could contribute to the aims and objectives of the Local Enterprises and Skills Development Programme, which provides employment through enterprise development.”

Surprisingly, however, the letter, which contained the directive, was received at the Assembly on January 24, 2013, nine solid months after the vehicle had been delivered. The cost of the truck was GH¢40,850, and was to be paid through a monthly installment of GH¢1,702.08 over a two-year period.

The Kwahu East District Assembly was one of the few selected districts to benefit from the above policy of the Ministry of Local Government and Rural Development.

However, some months after the truck was delivered, the blue DONGFENG vehicle vanished from the Assembly, only to resurface at the residence of the DCE in September 2013, after some assembly members became agitated over the missing truck.

For twelve months, the truck was said to be operating on a commercial basis, such as transporting goods and services from Donkorkrom and neighbouring communities to Nkawkaw, Koforidua, and Accra.

“This is sheer wickedness. Our DCE is enriching himself with the truck at the expense of the purpose for which it was delivered to the Assembly. Our duty is to protect the assets of the Assembly, and to ensure that they are used to improve [the] lives of the citizenry, and not just one person. Our DCE must be called to order,' noted one of the aggrieved assembly members, who spoke to The Chronicle on condition of anonymity.

Peter Asante, who once used the truck for assembly duties, also told The Chronicle in an interview that he was initially targeted by the aggrieved assembly members for conniving with the DCE to commercially operate the truck for their private gain.

“When the assembly took delivery of the truck, I was the one assigned to it. We used the truck to distribute chairs and desks to some rural communities in the district, as well as some relief items.

'But, later I was relieved from that duty, only to realise that the truck had been given to somebody outside the Assembly to operate. Initially, some of the assembly members accused me of conniving with the DCE to operate the vehicle for our private gain, until they found out that I was not part of the plan.”

He added: “I had earlier dismissed such accusations against the DCE, until I saw the truck with my naked eyes transporting charcoal, tubers of yam, and other goods from Donkorkrom to Accra.”

Checks at the State Insurance Company (SIC), Nkawkaw branch, revealed that the truck was in August 2012 insured in a private person's name.

But, the DCE, when confronted on the issue, again denied having knowledge of the subject matter.

“I am not sure whether the vehicle has been insured or not, but as we speak, it is safely parked in my residence. Nobody is using it for any commercial venture. I believe some people are trying to be mischievous,” he noted.

According to Mr. Asamoah, the assembly had been unsuccessful in finding an interested person to buy the truck, due to its high price.

“We submitted a list of 100 people to be given vehicles to work and pay, but when they delivered the truck and we told them of the price, they said the price was too much. Till date, none has shown interest in buying the truck,” he narrated.

He said the assembly could not even afford to buy the truck due to the price, and has communicated such to the Eastern Regional Coordinating Council for advice.

“We have discussed the issue with the Eastern Regional Coordinator, and the Coordinating Council has requested that the assembly write to them officially, informing them that the price of the truck was costly, and, therefore, potential customers could not afford to buy it until it was reduced,” explained the DCE, whose post is on the line.