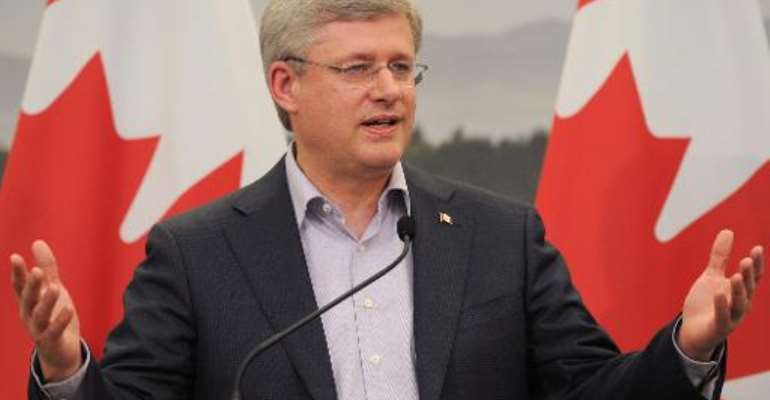 Ottawa (AFP) - Canadian Prime Minister Stephen Harper on Monday called for the immediate release of two Canadians now on hunger strike after being held in Egypt without charges for six weeks.

John Greyson is a Toronto filmmaker and university professor, while Tarek Loubani is an emergency room doctor from London, Ontario.

The men were detained in mid-August soon after trying to enter Gaza, where Greyson was scouting for a documentary and Loubani planned to help train local doctors. They were turned back at the Gaza border and later arrested after a protest in Cairo.

They began their hunger strike on September 15, according to Greyson's sister, Cecilia.

"In the absence of charges, Dr. Loubani and Mr. Greyson should be released immediately," the Canadian prime minister's office said in an email to AFP.

Conditions at Tora prison in Cairo are "ridiculous," Loubani and Greyson said in an open letter smuggled out of prison and released over the weekend.

The pair described "sleeping like sardines on concrete with the cockroaches (and) sharing a single tap of earthy Nile water."

They said they only meant to transit overnight through Egypt to get to Al-Shifa Hospital in Gaza, but after the Rafah border closed, they decided to check out protests at Cairo's Ramses Square five blocks from their hotel.

"The protest was just starting -– peaceful chanting, the faint odor of tear gas, a helicopter lazily circling overhead –- when suddenly calls of 'doctor,'" they wrote in the letter.

Tarek "snapped into doctor mode" to treat a young man with a bullet wound being carried by others, while Greyson started filming "the carnage" that would soon follow.

"The wounded and dying never stopped coming. Between us, we saw over fifty Egyptians die: students, workers, professionals, professors, all shapes, all ages, unarmed. We later learned the body count for the day was 102."

They said they started back to their hotel in the evening, but couldn't find a way through police cordons and finally asked for help at a checkpoint.

Egyptian authorities also seized their camera gear, as well as routers and several toy-sized helicopters designed for transporting medical samples, which were meant for the hospital.