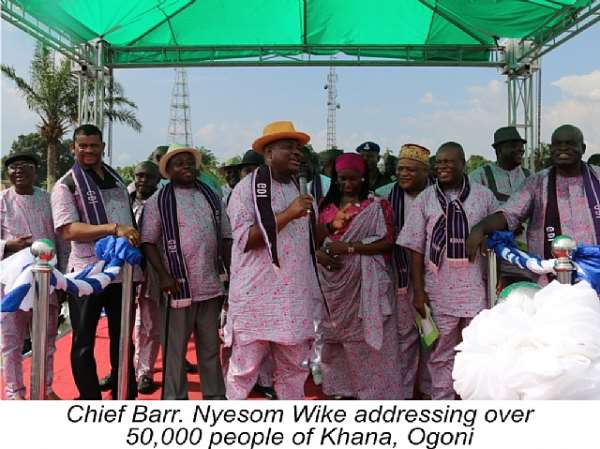 The supervising Minister of Education, Chief (Barr) Ezebunwo Nyesom Wike has assured Nigerians, particularly students of the various affected Universities in Nigeria that the on-going strike embarked upon by members of the Academic Staff Union of Universities (ASUU) will soon be called off.

The Minister, who was speaking as a Special Guest at an Inauguration and Thanksgiving Service of the Grassroot Development Initiative (GDI) in Khana Local Government Area in Bori, Rivers State, said members of the striking Universities Union will soon return to the classes following a positive ongoing resolution engagement between them and the federal government.

He disclosed that President Jonathan is committed to the resolution of the crisis and has therefore directed that all issues in the crisis be addressed accordingly.

The Minister expressed optimism that following the commitment and sincerity of the Federal Government in seeing to the resolution of the crisis, the doors of the nation's Universities will too soon be open for the normal academic activities, appealing to the students not to despair but to continue to co-operate and support the Ministry of Education for the development and success of our educational system.

He reassured that the President will continue to take issues that affect the Education sector seriously.

In a related development, the Minister, who is also the Grand Patron of the Grassroot Development Initiative, disclosed that some lawmakers loyal to Governor Rotimi Amaechi of Rivers State are now seeking asylum in a foreign country as a wind of change blows in Rivers State.

Chief Wike noted that the Amaechi's loyal lawmakers who have shown condemnable disloyalty and insubordination to the leadership of President Goodluck Jonathan took their position as it is clear that they have been anti the people and the development of the state.

He therefore called on the people of the state to remain steadfast and peaceful in their quest for development, assuring them that President Jonathan will not let them down.

On the East West Road, the Minister noted that although the entire stretch of the road is yet to be completed but observed that considerable work has been done by the contractors handling the Akwa Ibom - Ogoni axis of the road.

He emphasized that by 2014, the entire East-West Road would be completed as promised by Mr President, disclosing that approval has been made by the President to the relevant Ministry to enable them complete the construction of the road by 2014.

Also speaking, the Deputy National Chairman of the Peoples Democratic Party, Prince Uche Secondus called on the people to continue to support the Jonathan administration, assuring them of total delivery of all promises made by the President and the PDP leadership in the country.

In their separate speeches, the State Chairman of the PDP, Bro Felix Obuah, Chief Sergeant Awuse, Sen. Lee Maeba and Kenneth Kobani commended the Ogoni people for their unalloyed support for President Jonathan and assured that Ogoni remains a focal point in the scheme of things particularly as an area that would be developed and be made to enjoy the proceeds from their God given resources.

They said come 2015, the people of Ogoni should not hesitate to support Dr Goodluck Ebele Jonathan for President, noting, 'We the people of South-South must not opt for any other position other than that of the President of the country.