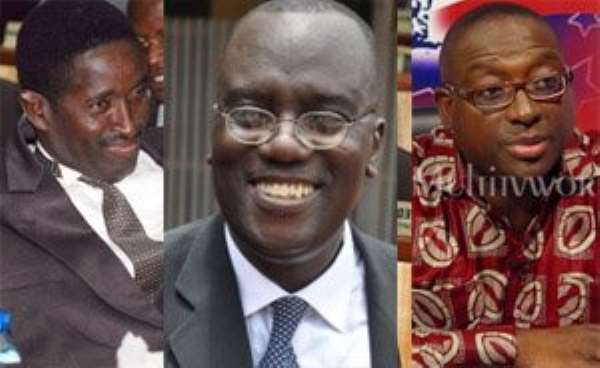 Captain Nkrabeah Effah Dartey (Rtd) is said to be lacing his boots to vie for the General Secretary position of the New Patriotic Party (NPP) which is currently held by Lawyer Kwadwo Owusu Afriyie, affectionately called Sir John.

Sources close to the retired army captain, who is also a former Member of Parliament (MP) for the Berekum in the Brong Ahafo, told DAILY GUIDE that even though the man was tight-lipped on the issue, he was preparing to publicize his intentions soon.

DAILY GUIDE gathered that two weeks ago, over 30 party organizers and coordinators in the Brong Ahafo region stormed his 'Exodus 14:14' residence and asked him to make a commitment to vie for the post come March next year.

A similar meeting was said to have been held last week Monday during which some constituency organizers reportedly pledged to support Captain Effah-Dartey, a lawyer.

The paper's sources in Volta regional capital, Ho hinted that Captain Nkrabeah Effah-Dartey, a former presidential aspirant of the NPP who was disqualified at the last minute on charges of attempted coup, used the recent Bar conference held in Ho to consult the Volta Regional executives of the party, including the Regional Chairman, Kenwuud Nuworsu and former Volta regional Minister, Kwasi Owusu Yeboah, who is also said to be eyeing the regional chairmanship position.

Interestingly, when asked to comment on the matter, Lawyer Effah-Dartey was coy, saying 'in politics, you never say never.'

However, a source close to Mr Effah-Dartey confirmed that the former infantry officer in Ghana Army, who is also playwright, newspaper publisher and hotelier, would hold a press conference on Friday, 18 October 2013 to announce his decision.

Other names, which have popped up as likely contenders for the General Secretary position include incumbent Sir John, former Deputy Communications Director of the party, Yaw Buaben Asamoa and former Presidential Press Secretary, Kwabena Adjei Agyepong.