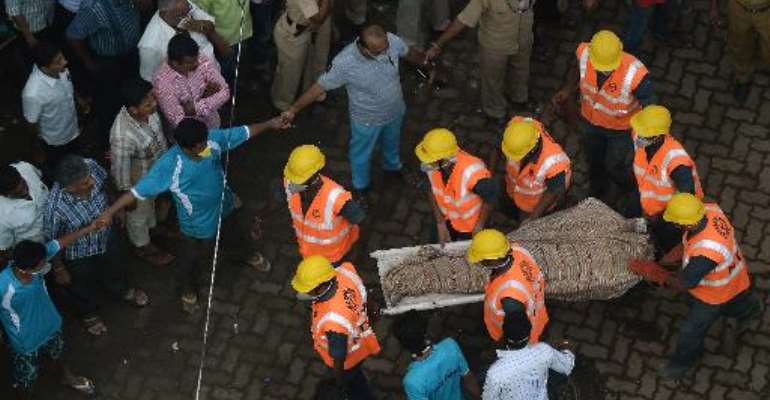 Indian personnel from the National Disaster Relief Force (NDRF) carry a body from the debris of a building collapse site in Mumbai on September 28, 2013. By Punit Paranjpe (AFP)

Mumbai (AFP) - The death toll from the collapse of a residential block in Mumbai rose to 60 on Sunday as rescuers ended their search operation with all the missing accounted for, officials said.

The five-storey block in the city's east, home to 22 families and owned by the municipal authority, came crashing down in a mass of rubble at daybreak on Friday.

"The toll has now risen to 60 and we have now called off the search for more bodies in the debris," Mumbai deputy police commissioner Tanaji Ghadge told AFP by telephone.

He said one person had been arrested over the incident, which marked the latest building disaster to hit the city and surrounding areas.

Thirty-three others were rescued alive from the rubble, Alok Avasthy, an official at the National Disaster Response Force told AFP by telephone from the incident site.

But he said the death toll may rise depending on whether victims in hospital succumb to their injuries.

A male survivor in his 40s was the last to be pulled out from under the twisted iron bars and fallen concrete on Saturday afternoon, Avasthy said.

Over the two days of emergency operations, distraught relatives stood tearfully watching the rescue efforts, hoping family members would be pulled alive from the twisted wreckage.

Several diggers had been pressed into action to lift some of the larger slabs of concrete, allowing teams of rescuers to take out bodies and search for those still alive.

The Press Trust of India news agency said the arrested man was accused of carrying out faulty and unauthorised renovation at his rented office-cum-warehouse on the ground floor of the building, which is thought to have caused the collapse.

Local media also said that the building, about 30 years old, had been listed as needing "urgent repairs".

Employees of the Municipal Corporation of Greater Mumbai, which owned the building, and their families were housed in the structure and had been asked to leave earlier this year.

A municipal spokesman did not explain why the families had been asked to leave or whether alternative accommodation had been arranged.

Local authorities said they would bear the cost of treating the injured and that compensation would be paid to families of the dead.

The cave-in was the latest in a string of building collapses in and around Mumbai in recent months, including one in April that killed 74 people.

The incidents have highlighted poor quality construction and violations of the building code, caused by massive demand for housing and endemic corruption.

The high cost of property in Mumbai and surrounding areas pushes many low-paid families, especially newly arrived migrants from other parts of India, into often illegal and badly built homes.

The situation is so dire that more than half of the city's residents live in slums.

Falling buildings are a nationwide problem. British daily The Guardian gathered statistics showing that 2,651 people were killed across India in 2012 from the collapse of 2,737 structures, including houses and bridges.