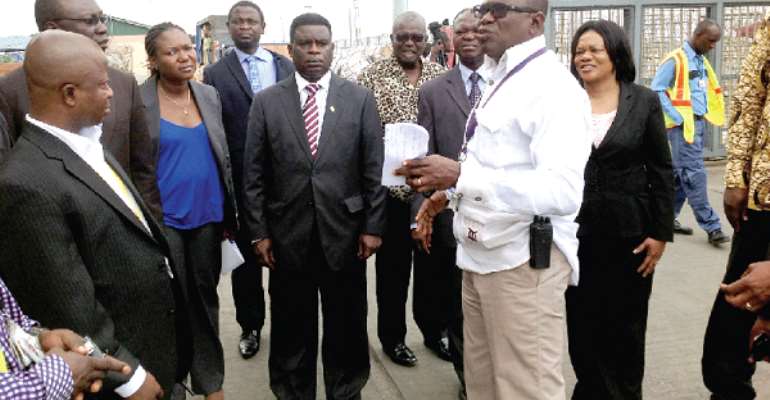 The Governing Council of the Ghana Shippers' Authority (GSA) has familiarised itself with operations at the Cargo Village of the Kotoka International Airport (KIA) in Accra.

The tour, through the various units in the facility, formed part of efforts by the council and the authority in general to get first-hand information on the operations of its stakeholders.

The information gathered is expected to feed into the formulation of policies by the authority and inform its relationship with the various stakeholders as it strives towards improving the operating environment for shippers in the country.

The KIA Cargo Village hosts a number of air-cargo related companies and stakeholders, whose duty it is to process cargo arriving into or going out of the country.

The tour would, therefore, help the members of the council to appreciate the various activities that go on there, the Head of the Shipper Services Department at the GSA, Naa Densua Aryeetey, told the media prior to its commencement.

The tour started with a call on the Managing Director of Aviance Ghana, Mr Pual Creig, to discuss issues of mutual interest among the two institutions.

Mr Creig called for frequent interaction between the GSA, the umbrella body of shippers in the country, and the company to help understand the operations of each other.

He also pledged his outfit's resolve to help reduce the challenges relating to cargo handling for the betterment of the industry.

Members of the GSA Governing Council, who included the Board Chairman, Commander (rtd) T. K. Dovlo, also visited the Perishable Cargo Village where they interacted with the management of AGPC Center Limited, the company that handles perishable cargo meant for export.

The team also interacted with the KIA Cargo Village unit of Customs noted for inspecting imports and exports at the airport.

Charges for services rendered, delays in cargo clearance and documentations by shippers took cerntre stage in all the interactions.

The Chief Excutive Officer of GSA, Dr Kofi Mbiah, said in an interview after the tour that the underlining factor was to help make the Ghanaian shipper 'more competitive.'

'If we are able to resolve the bottlenecks that have been hindering trade, then cost of operations will reduce and that will inure to the benefit of the shipper and the country,' Dr Mbiah said.