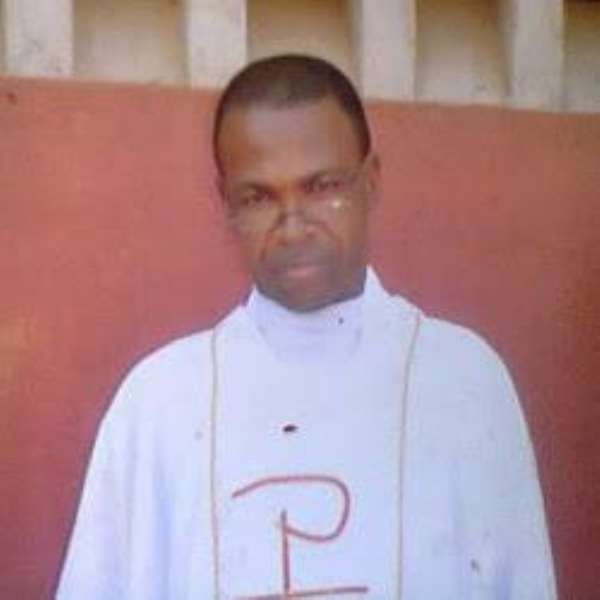 *He Was Stripped Naked While Celebrating Sunday Mass

*Plot Afoot To Poison Him In Jail

Rev. Fr. Ani said to be having a running battle with the Bishop of Awgu Catholic Diocese, Rt. Rev. John Okoye, for sometime now, was arrested and detained at the State Police Headquarters last weekend over the alleged attack on policemen investigating issues arising from the crisis in the Parish by his supporters.

The priest who was arraigned alongside three other parishioners was charged with assault and unlawful attempt to kill one Inspector Cosmos Nzeribe and a team of police officers attached to police headquarters Enugu.

They were also accused of attempted armed robbery, kidnap, unlawful damage of a Toyota Corolla car with which the police visited as well as robbing Inspector Nzeribe of his 18 rounds service pistol with live ammunition.

Presiding Magistrate, E.M Egumgbe remanded the suspects in prison custody saying that they can apply for bail in a high court.

Counsel to Rev. Fr. Ani, Barrister Ray Nnaji who spoke with newsmen after the court session said; 'I have been following this matter for some time, this matter has been in court and we know quite well that action of beating the police is condemnable, though the priest has said he has no business with beating the police and did not tell anyone to beat the police.

'These are the highest allegations that can be leveled against a man of God by some people who are meant to protect lives and property. I am disappointed with the police; nobody supports what happened but nobody has looked at the situation, you are trying to look at the effect without looking at the cause.

'And the police actually used the opportunity to manhandle the priest, stripped him naked, detained him and did not allow access of lawyer to him.'

Deep throat sources in Mmaku community said the matter is deeper than what is being reported revealing that, 'at the heart of the matter is a property belonging to St. Theresa's which the bishop of Awgu diocese (John Okoye) wants to takeover and which the community is resisting.''

They also finger as mastermind of Father James' ordeal a Reverend Sister who hails from the community and who is in a love-tango with a cardinal archbishop based in Abuja.

''A reverend sister who hails from our community and whose lover is a cardinal based in Abuja is also in the middle of the storm and was actually the person that unleashed mayhem on Father James and the community," the sources said.