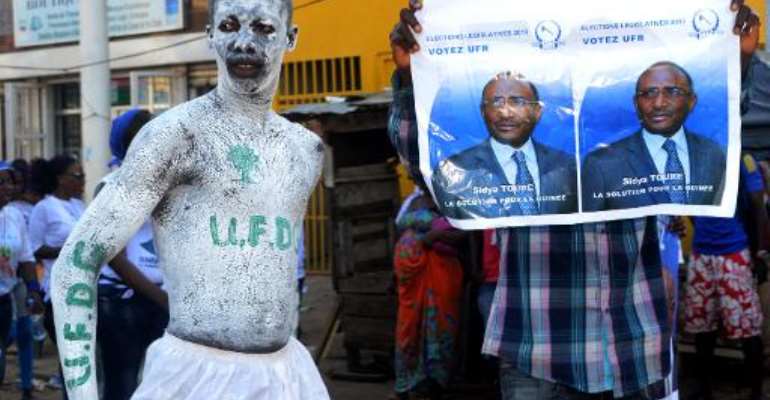 Opposition supporters gather during a meeting in Conakry on September 26, 2013 on the last campaign day ahead of the first parliamentary elections Saturday in the troubled west African nation in over a decade. By Cellou Binani (AFP/File)

Conakry (AFP) - Guineans got to the polls Saturday in the first parliamentary elections for more than a decade in the troubled west African nation, after months of delays and a campaign plagued by deadly unrest.

Voters have a choice of more than 1,700 candidates vying for 114 seats in a national assembly which will replace the transitional parliament that has been running the country since military rule came to an end in 2010.

The vote, originally due to have been held within six months of the swearing-in of President Alpha Conde in 2010, has been delayed numerous times amid disputes over its organisation, stoking deadly ethnic tensions that have dogged Guinean politics since the country's independence from France in 1958.

"These elections will allow us to emerge from a chaotic five-year transition," Conde told reporters on Friday, expressing the hope that the vote would signal a new era of prosperity in which Guinea would be free to profit from its vast mineral wealth.

Polling booths are due to open at 8:00 am (0800 GMT) in what is regarded as the first genuinely democratic parliamentary election, after 2002 polls held during the military dictatorship and marred by opposition boycotts were widely dismissed as a sham.

The opposition has accused the president's camp and the electoral commission of conniving to rig Saturday's vote, and protests in the capital Conakry have often descended into violence.

Earlier this week opposition protesters shot dead a trainee policeman as renewed clashes broke out across the city, leaving more than 70 people wounded.

Guinea's Muslim and Christian leaders called Friday for a peaceful election day, urged all parties to put their country before their own interests and ensure their supporters did not resort to violence.

"Any political struggle must be made for Guinea and not against it. Muslims and Christians, all religious leaders call on people to do their patriotic duty without violence," said Mamadou Saliou Camara, the grand imam of Conakry.

Guinea's election commission said on the eve of the elections that conditions required for the polls to be credible were being met and 93 percent of voter cards had been distributed.

One of the poorest countries in the region despite vast potential for mineral exploitation, Guinea was run by a succession of autocratic rulers after gaining independence from France in 1958.

A military junta took control in December 2008 at the death of President Lansana Conte, who seized power in a coup 24 years earlier. In 2010, civilian rule was ushered in after a transition period and an election also marred by delays and violent ethnic clashes.

Politics in Guinea typically polarises some two dozen ethnic groups who otherwise live in harmony alongside each other -- with the Fulani the largest at around 40 percent of the population followed by the Malinke and Soussou.

Conde, a Malinke, leads the Rally of the Guinean People and claims to espouse socialism while his main rival, Cellou Dalein Diallo is a Fulani and heads the centrist liberal Union of Democratic Forces of Guinea (UDFG).