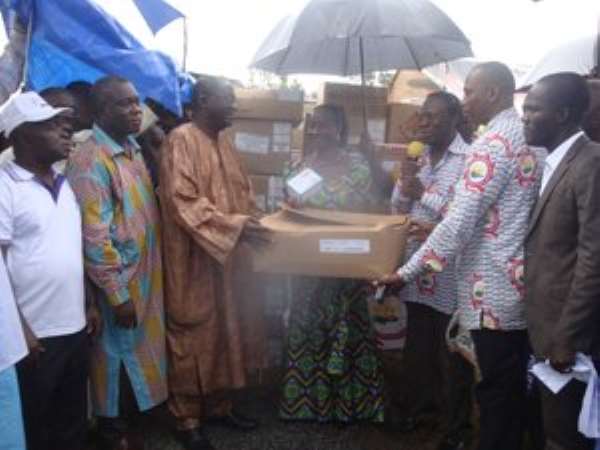 For about a decade now, he said, labour unrests, notably in the health sector, had led to health workers embarking on countless industrial actions which did not augur well for the health delivery of the people and eventual development of the country.

'Since 2010, I have not been happy about the spate of strikes among public sector workers. It is even worrying when the strike action involves health professionals because as the saying goes 'a nation's wealth depends on a healthy workforce.

'I have been following media publicity on the dispute between Fair Wages and Salaries Commission (FWSC), the National Labour Commission (NLC) and some health professionals including GHOSPA which are not fully resolved yet.'

Speaking at the launch of this year's World Pharmacists Day, Most Rev Yinkah Sarfo lamented that industrial actions were impacting negatively on the fortunes of the country, reiterating his call on the President to solve all labour disputes to avert strikes.

The historic event which took place at the Anglican Health Centre at Tano Odumasi in the Atwima Mponua District of Ashanti Region on Wednesday was attended by top dignitaries including Minister of Health, Hon Sherry Ayittey, among others.

The Anglican Archbishop announced the church's plan to upgrade the health centre at Anglican Health Centre at Tano Odumase to a fully-fledged hospital by 2014 to serve more people.

He appealed to the health ministry to facilitate for a resident medical doctor to be stationed at the facility, assuring that the Kumasi Diocese of the Anglican Church would take steps to motivate all the health professionals working at the facility.

The 2013 World Pharmacists Day which was celebrated across the globe on Wednesday was under the theme: 'Pharmacists-Simplifying Your Medicine Use, No Matter How Complex.'

She expressed concern over the scourge of insidious crisis of counterfeit drugs in the country, disclosing that 'there is already a critical means of evidence to suggest that the impact of sub-standard drug is grave.'

Hon Ayittey noted that the quality of some medicines in the country is usually a suspect due to weak nature of regulation and widespread non-compliance with international practice.

She therefore appealed to the Pharmaceutical Society of Ghana (PSGH) to assist government to improve access to medicines, improve supply management systems, increase quality assurance and promote the rationale use of drugs.

President of PSGH, James Ohemeng Kyei, admonished health professionals, notably pharmacists, to accept postings to the rural areas and help in the effective provision of quality health care to the people.

He insisted that it was about time that health professionals made their presence and impact felt strongly in the hinterlands, stressing that the rural folks also deserved quality healthcare.

MP for Atwima Mponua, Hon Isaac Asiamah, called for a sober reflection of the NHIS after 10 years of its implementation so that all bottlenecks in the social intervention programme would be corrected to help improve the scheme.

The Chairman of the event, Prof Emeritus Kwame Sarpong cautioned the public against buying medicines from self-styled pharmacists since it could be harmful to their health.

The PSGH as part of the historic occasion donated essential drugs worth a staggering GH¢20,000 Anglican Health Centre at Tano Odumase to help promote healthcare delivery at the area.