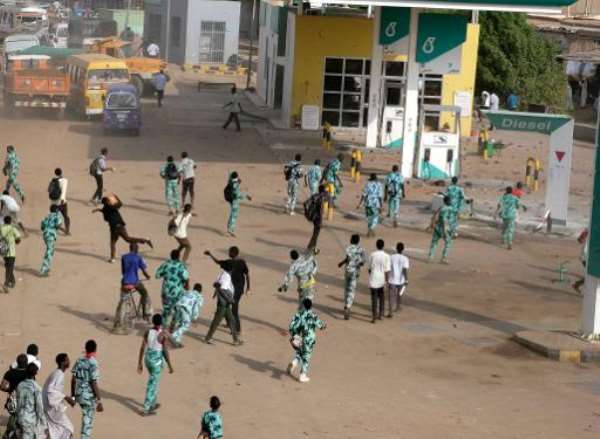 Khartoum (AFP) - Sudan was braced Friday for a fifth day of demonstrations against fuel price hikes that have turned into anti-government protests, as security forces were accused of shooting dead 50 people.

Activists have called for protesters to take to the streets after the weekly Muslim prayers, and a massive deployment of security personnel was ordered.

Soldiers also stood guard outside Khartoum petrol stations which opened for business, as long lines of cars waited to fill up, an AFP correspondent said.

Internet access was cut for the second time this week, after being briefly restored on Thursday following a previous break in the service.

Most shops were closed but residents were out seeking supplies.

"I want my family to have what we need because we don't know where this is all going," said Ahmad Hassan, 50, stocking up on canned goods.

Siding with the youth activists, the Al-Umma party of main opposition leader and former premier Sadeq al-Mahdi called for "the Sudanese people to step up the protests".

Trying to maintain a blackout on the unrest, the authorities on Friday seized or blocked publication of three newspapers, even though they are considered pro-government, journalists said.

The Al-Sudani and Al-Majhar al-Siassi dailies were seized at the printing press, they said, while Al-Watan was ordered not to print after covering the unrest in its Thursday edition.

The African Centre for Justice and Peace Studies and London-based Amnesty International said 50 people were killed after being shot in the head or chest on Tuesday and Wednesday.

"Local sources and activists have put the figure much higher, in excess of 100," the groups said in a joint statement.

They also expressed "deep concern" about reports of hundreds being detained and urged the authorities "to ensure that they are protected from torture and other ill-treatment".

"Shooting to kill -- including by aiming at protesters' chests and heads -- is a blatant violation of the right to life," said Lucy Freeman, Africa Deputy Director at Amnesty.

Reports from Khartoum on Thursday said at least 29 people were killed after rioting erupted on Monday in the largest protests since President Omar al-Bashir seized power 24 years ago.

Police confirmed the 29 fatalities without giving details, but hospital and other sources said most had been shot dead.

The initial protests were staged on Monday in Wad Madani in Gezira state south of Khartoum, the scene of the first death, and later spread to Nyala, the capital of South Darfur state.

Late on Thursday, police fired tear gas to disperse hundreds of demonstrators in Khartoum's twin city of Omdurman, and a small protest was also held in the capital itself.

"The people want the fall of the regime," protesters, many of them students, have chanted in Khartoum, echoing the refrain of Arab Spring protests that toppled several governments in 2011.

The education authorities have announced the closure of schools until Monday.

Young activists called on demonstrators to keep up "the revolution and their protests" until the fall of the regime, urging the security forces to side with the people.

The Alliance of the Youth of the Sudanese Revolution, in a statement, said its aims were for Bashir to step down "along with the corrupt government and for its services to be dismantled".

Petrol and diesel prices at the pump shot up on Monday after fuel subsidies were scrapped with Bashir saying they had reached "a level that is dangerous for the economy".

Inflation is already running at 40 percent.

Khartoum lost billions of dollars in oil receipts when South Sudan gained independence two years ago, taking with it about 75 percent of the formerly united country's crude production.

As the protests swept the country, the foreign ministry denied Bashir has cancelled a trip to address the UN General Assembly, originally planned for Thursday.

It urged the US government "to respect its obligations and issue visas to President Omar al-Bashir and the delegation accompanying him to New York."

The International Criminal Court has called on Washington to arrest Bashir who is wanted by the court in The Hague for alleged war crimes, crimes against humanity and genocide in Sudan's Darfur conflict.