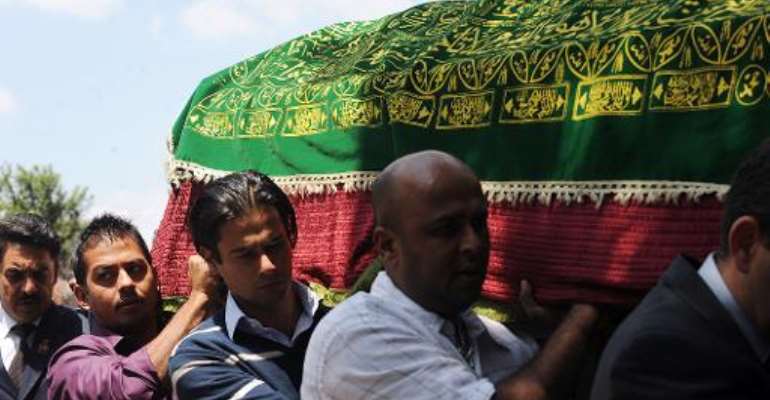 Pall bearers carry the coffin of Kenyan journalist Ruhila Adatia-Sood, killed in the Westgate mall attack, during a funeral ceremony in Nairobi on September 26, 2013. By Simon Maina (AFP)

Nairobi (AFP) - The second round of the children's cooking contest she was hosting had just started, the sun was out and she had just felt her baby kicking when she heard what sounded like firecrackers.

Just seconds before the Nairobi mall attackers started their rampage, Ruhila Adatia-Sood was in the prime of her life and enjoying a typical family weekend three months before the arrival of a baby.

The contest was organised on the rooftop carpark of the Westgate mall, one of the main gathering points in Nairobi for the Muslim Ismaili community she belonged to.

Adatia-Sood and some of her friends were supervising 33 children who were toiling away in the open-air kitchen, each one having to prepare a starter or a main dish to be followed by a dessert.

"We are super excited!! Do join us from 11 am onwards for the 2nd round of Sungold Sunrice SuperChef Junior! See you there," Kamal Kaur, an East FM presenter, wrote on the radio's website ahead of the event.

The competition had barely begun, with a crowd of parents and other people watching, when Kaur said they "started to hear popping noises".

"We heard what sounded like firecrackers," she said, recounting how the group then ran to the edge of the parking lot and looked over to see people streaming out of the mall.

She then ran to find her son and they tried to get the children out through the service entry of a cafe.

"One man shot at my son, but he managed to duck," Kaur said, describing a man wearing jeans, a black T-shirt, sunglasses and a checkered keffiyeh headscarf wrapped around his head.

"He was holding a big automatic weapon, and I could see a pistol sticking out of his pocket."

Mitul Shah, marketing director at the company sponsoring the function, died "trying to rescue the children,” his family said.

Some 2,500 people packed in a hangar-like structure at the community's sports and social club to pay their last respects to the slain radio host and another Ismaili woman killed in the attack, 44-year-old Shairoz Dossa.

Mourners trooped in by the dozen, as those already assembled chanted prayers, removed their shoes, and filed past the caskets before separating into men on one side, women on the other.

Many of the women had covered their heads in white muslin scarves. Some mourners carried rosaries.

"This is a very sad day. I have no words," said a young man dressed in black who described himself as a friend of Ruhila's before turning away to hide his emotions.

Adatia-Sood bled to death after being shot in the leg.

"We are a small community. In a tragedy like this we get together," said Azym Dossa, a tall broad-shouldered man in a dark suit who lent his fleet of coaches to ferry mourners across town.

"I go to Westgate on Sundays to have a capuccino," he went on.

"I can't sleep at night any more," said Shelina Manji, a young woman in skinny jeans and stilettos who works in advertising.

"She and I were very good friends," Manji said from behind oversized sunglasses. "When I heard the news I was in shock," she said.

"Just before it happened Ruhila texted a friend to say she could feel her baby kicking."

Soldiers will die more in any order to shoot to kill galamse...
20 minutes ago

We see politicians flaunting cars, houses in less than four ...
41 minutes ago