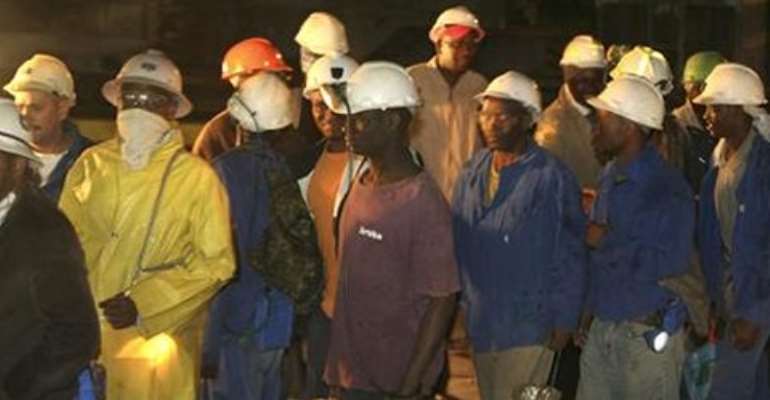 Newmont Ghana says approximately 300 of its miners are expected to lose their job by the end of the fourth quarter of 2013, as part of the mine's ongoing operations to streamline cost structure and improve business efficiency.

The massive job-cuts reflect the company's work to improve its increasing cost structure while creating value for all its stakeholders.

“Ongoing price volatility and steadily rising costs create intense pressure for us to continuously improve our efficiency and effectiveness to ensure that our operations are profitable and sustainable.

“We face some very difficult decisions in streamlining our organisation and are committed to treating people fairly throughout this process,” said Dave Schummer, Regional Senior Vice President - Africa Operations.

Officials at the Newmont's Corporate Communications office told B&FT in a telephone interview that discussion and negotiations are ongoing regarding the compensation and severance packages for affected workers.

“We are in discussion with the labour unions as well as the Ghana Mine Workers Union,” the official confided.

Other mining companies in the country are contemplating a similar strategy because the industry challenges and tax hikes are bringing enormous pressure on their operations.

The mining industry is again faced with numerous global challenges, including the fall in gold prices and rising cost of production.

AngloGold
Mining giant, AngloGold Ashanti's (AGA) Obuasi Mine announced imminent job-cuts of approximately 430 of its miners, partly due to a fallen gold price on the global commodity market and its broader revival strategy.

The increasing production cost and dwindling gold prices has been a bane in the Ghanaian mining industry.

The cost structure at AngloGold Ashanti's flagship Ghana gold mine is unsustainable and the company is looking to make cuts to counter rising costs and falling production, Chief Executive Srinivasan Venkatakrishnan is reported to have told Reuters in an interview.

Production costs per ounce have more than doubled since 2008 at Obuasi, which is Ghana's largest mine. A fall in gold prices this year has worsened the financial strain and the company's Ghana unit is relying on its parent company for funding.

"Obuasi is currently making losses at the operating level ... The current cost structure at the operation is clearly unsustainable," Venkatakrishnan told Reuters via email.

AngloGold will spend US$30 million to US$40 million this year on a long-term plan to build a ramp to improve access to the ageing Obuasi mine and speed mechanisation in a bid to raise production volumes and lower costs there.

"We are looking across the business at reducing costs and improving productivity by investing capital in the new ramp access," Venkatakrishnan said.

The mine's biggest expenses are payroll and electricity. Venkatakrishnan said the company wants to eliminate wasteful expenditures and is also considering worker lay-offs.

PricewaterhouseCoopers (PwC) report has cited that the mining industry is confronted with a severe confidence crisis based on whether costs can be controlled, return on capital will improve or commodity prices will not collapse, among others.

Mining stocks fell only slightly last year, PwC said, but they plunged by almost 20 percent in the first four months of 2013. And while over the past decade the mining industry has outperformed the broader equity markets, this trend has recently changed.

The PwC report said regaining confidence in the industry depends on how the companies respond to rising costs, increasingly volatile commodity prices, and other challenges such as resource nationalism.

But despite the problems “it's not all bad news”, the report said. “Production volumes and dividend yields are up; and while prices have fallen, they have not crashed,” it added.

Figures from the Minerals Commission indicate that the mining industry attracted US$ l billion in total investment inflow into the country in 2012. These investments came from producing, exploration and support Service companies.

The multiplying effect of this investment in the country's economy cannot be overestimated.

The Bank of Ghana also reported that the mining industry's contribution to total merchandise export earnings was about 43 percent in 2012.

Data from the Ghana Statistical Service show that the mining sub-sector grew by 23.5 percent in 2012. This compared favorably with the 18.8 percent it achieved in 2011.

Furthermore, the Ghana Revenue Authority (GRA) has stated that the mining sub-sector maintained its position as leading contributor to the authority's domestic tax contribution in 2012.

The total payment from the mining industry to the authority's chest was approximately GHC l.5 billion in 2012. This amount represents about 27.04 percent of GRA's total domestic collection in the year.

The 2012 collection was an increase of 45 percent on the GHC l.03 billion it collected from the mining industry in 2011. The hike was as a result of increased minerals revenue due to higher gold price and marginal increases in output, which translated into higher mineral royalty and corporate tax payments.

On corporate tax, withholding tax and levies, the mining and quarrying sub-sector contributed about GHC 894 million to the GRA's contributions - representing about 37 percent of the total corporate tax collected by GRA in 2012.

The mining sector maintained its position as the highest payer of company tax during 2012.

The increase was largely attributable to gold revenue, which went up on the back of appreciation in realised gold price and output.

Meanwhile President John Mahama says "Government is very concerned about what is happening and is looking out for options to solve the problem”.

Mahama urged mining companies to cut costs and employ more Ghanaians rather than expatriates. However, he ruled out a reduction in corporate income tax on mining companies, which is currently fixed at 35 percent.