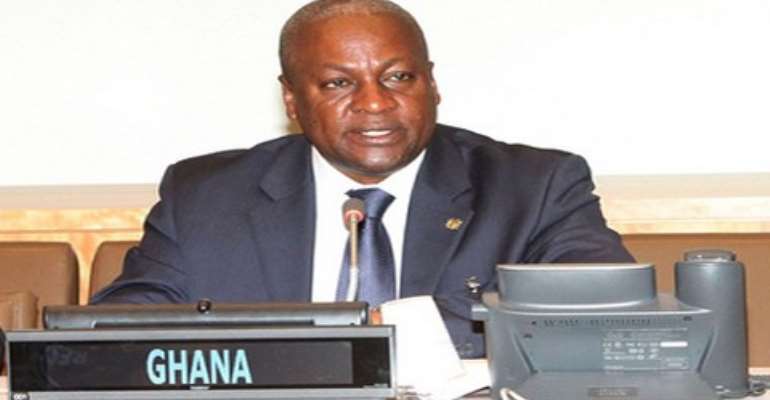 Ghana will this year, will begin a demonstration project vaccinating girls against human papillomavirus (HPV).

The HPV is the leading cause of cervical cancer, which is the biggest cancer killer of women on the African continent.

President John Mahama revealed this in New York on Tuesday, when Ghana hosted a side event at the ongoing UN General Assembly, in collaboration with the Global Alliance for Vaccines and Immunisation (GAVI) and the Global Fund.

"In fact Ghana, was the first GAVI partner country to introduce two new vaccines at the same time. In April last year, we added pneumococcal and rotavirus vaccines to the national routine immunization programme, thus protecting our children against the deadly diseases of pneumonia and diarrhoea.

This year, Ghana will begin a demonstration project vaccinating girls against human papillomavirus (HPV). HPV as you are aware, is the leading cause of cervical cancer, which is the biggest cancer killer of women on the African continent," president Mahama said.

The session on innovative development models was on the theme "21st century development: harnessing the power of global public-private partnerships in the post 2015 agenda.

It was attended by implementing and GAVI partner countries, the donor community, officials from the UN, private sector partners, civil society, the CEO of the GAVI alliance and his team and the Executive Director of the Global Fund to Fight AIDS, Tuberculosis and Malaria.

President John Mahama noted that the post 2015 agenda provides an opportunity "for the introduction of new ways of delivering smart development by harnessing the lessons learnt from global public-private partnerships."

GAVI and the Global Fund, he said, have enabled new financing for global health at an unprecedented scale.

"Together they have raised well over US$ 30 billion since their creation. This represents a massive injection of resources for health. Importantly, the money has not just come from government donors. These partnerships have demonstrated the potential to raise funds from the private sector, through capital markets, innovative marketing, as well as via commercial relationships and direct donations", President Mahama stated.

Turning his attention to Ghana and its relationship with the two bodies, Mr. Mahama said the GAVI Alliance has driven down the price of major new vaccines by over a third in the last two years. The Global Fund has also helped to reduce the price of antiretroviral drugs by over 50%.

According to Mr. Mahama, the partnership is helping with the introduction of new lifesaving vaccines.