Ghana will not be complacent in attaining MDG - Mahama 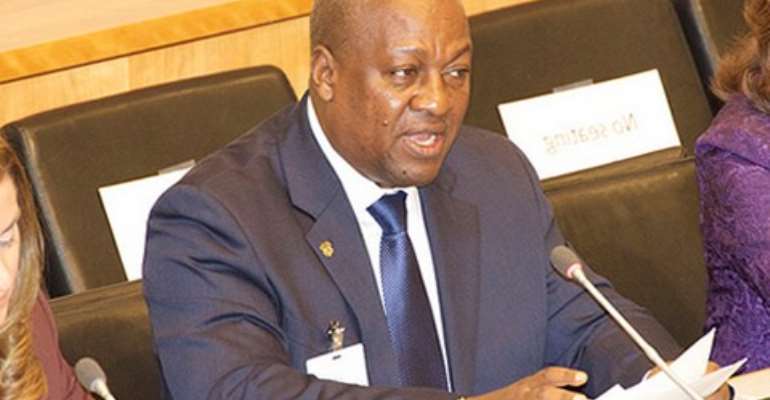 President Mahama addressing the forum on how Ghana is working to meet the 2015 timeline.

President John Mahama has told world leaders in New York that his country is working to keep the progress towards attaining the Millennium Development Goals (MGGs) on course.

Ghana, he said, will not be complacent in its efforts, especially as challenges such as regional and socio-economic disparities still remained.

He was speaking at an UNDP/World Bank organized side event on MDGs: Tackling the unfinished business and accelerating progress. Other heads of state and governments at the event were from Tanzania, Bangladesh, Costa Rica and the Kingdom of Tonga.

President Mahama said Ghana has made significant achievements in reducing extreme poverty by half ahead of 2015 under the MDG 1, while on course to achieving MDGs 2 on Education, MDG 3 on Gender Equality, and HIV & AIDS, Malaria and other Diseases relating to MDG 6.

He admitted that Ghana is lagging behind on MDG 4 on child mortality, MDG 5 on maternal health as well as the sanitation aspect of MDG 7.

President Mahama however outlined government's strategy towards remedying the disparity.

“We have come up with deliberate programmes such as the Savannah Accelerated Development Authority (SADA) to help bridge the developmental gap between the north and the south”, he noted.

According to him, government is tackling head-on the challenges and is implementing an MDG Acceleration Framework to support the rapid achievement of the 2015 deadline.

He attributed Ghana's achievement to the fight against extreme poverty, support for school enrolment, government's commitment to maintaining stable growth and translating growth into desirable outcomes through policy.

“Despite the progress in the MDG for education, more work needs to be done in terms of enhancing the quality of education and gender parity especially beyond the primary school level”, he asserted.

He commended the UN, JICA and USAID for their continuous support to Ghana in its developmental projects.

President Mahama had earlier joined other world leaders for the opening session of the 68th session of the UN General Assembly, with the UN Secretary General, US President Barack Obama, Nigerian President Goodluck Jonathan addressing the Assembly.