Bawumia posters pop up in Accra 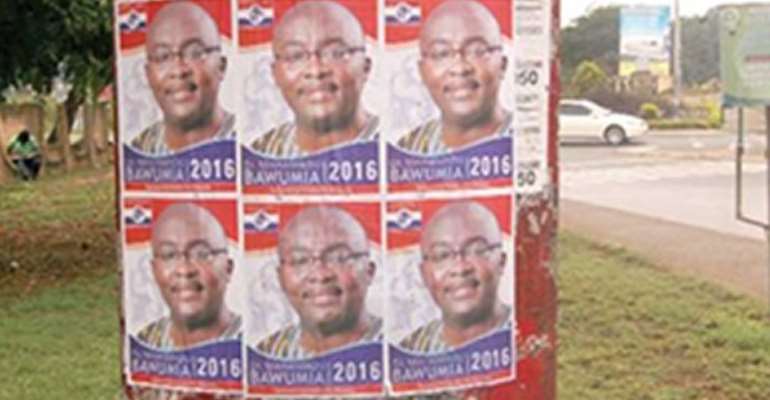 Posters of Dr Bawumia along the castle road, near the Psychiatric Hospital in Accra.

Some posters have been sighted in certain areas around the Psychiatric Hospital in Accra, advertising former banker and running mate of the New Patriotic Party's (NPP) flag bearer at the 2012 elections, Dr Mahamadu Bawumia, as the party's preferred choice for 2016.

The posters bear the portrait of Dr Bawumia with the NPP's symbol (elephant) as a water mark logo at the top left corner and the inscription 'Sponsored by friends of Dr Bawumia' beneath.

Denial of involvement
However, when the Daily Graphic contacted Mr Anthony Karbo, spokesperson for Dr Bawumia, he denied the party's knowledge or involvement in any subtle attempts to parade the 2012 NPP running mate as the party's next flag bearer.

In an interview on Tuesday September 24, Mr Karbo said, "first of all, these posters are not coming from the NPP or its agents but from opponents of the party,” alleging he had tapes to substantiate his claim.

He said he was not surprised at the turn of events since it was not the first time that was happening.

He recalled that a similar thing occurred just after the election petition hearing.

According to Mr Karbo, the sudden springing up of the posters was aimed at “drawing unnecessary attention to the NPP to suggest there is a kind of leadership crisis” or jostling for the NPP flagbearership.”

“In any case, there has not been any discussion whatsoever in the NPP about a vacant position that is open for contest - for instance the flagbearership of our party,” he said.

Mr Karbo stated that after completion of the party's 'thank you tour', Dr Bawumia was "spending a lot of his time working with the party to find the best ways in which we could foster unity and create a stronger party to capture power in 2016 .”

He said Dr Bawumia had stated clearly he had no intention at this point in time to contest any such position, especially when the elections were not due yet.

"The party is focusing on polling station, constituency, regional elections before we get to the national elections,” Mr Karbo informed, calling on all Ghanaians and supporters of the NPP to disregard the posters.