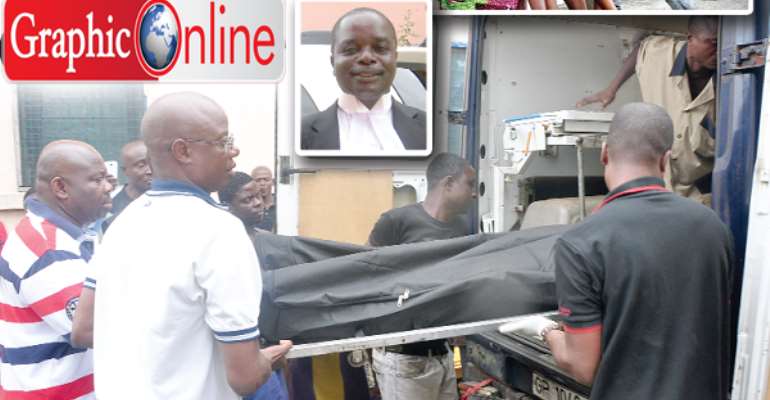 Yawson-Adjei, who is the Secretary of the Ghana Institution of Surveyors (GIS) and valuer, hanged himself in his private office on the first floor of a rented premises at Adabraka.

The father of three is said to have left his Kokomlemle residence about 3 a.m. for his office (in a taxi), where the incident took place.

He left a written note directing a lady named Narh to give a signed cheque for GH¢3,000 to his wife.

Yawson-Adjei was with the Valuation Estate and Surveying Division of the GIS and was Chief Executive Officer of Property Lane Limited.

When the Daily Graphic team got to the scene about 11 a.m., pockets of residents had gathered discussing the issue.

Personnel from the Homicide Unit of the Ghana Police Service were also at the scene to convey the body to the Police Hospital mortuary.

A picture captured on mobile phone, however, showed the deceased wearing a white T-shirt and a red boxer's shorts and hanging from the ceiling with a rope around his neck.

'We had conducted examination for our trainees for admission to membership, so we decided that we move outside Accra to have time and concentrate to mark and then do peer review.'

'I was marking with him when he began complaining about being blank and being unable to appreciate what he was marking. I asked him on a number of occasions to go and rest,' he said.

According to Mr Martey, Yawson-Adjei took the rest and came back after two hours but still complained of having gone blank.

On Sunday evening, he took Yawson-Adjei to the Valley View University Hospital for treatment, and on arrival the nurse observed him and said his blood pressure was very high because he had gone through so much stress.

'They gave us prescription and I took him back to the hotel. But he was still weak so we arranged for him to be taken home.

'I called his home this morning to find out his status but I was told that something had happened and that he left home around 3 a.m. Apparently, they did not know where he was until they discovered him in his own office,' he said.

Another source told the Daily Graphic that his wife had called to inform Yawson-Adjei's elder sister that her brother had left home at dawn and was nowhere to be found.

'It was when the sister dashed here around 6 a.m. that she discovered his body hanging,' the source said.

Witnesses
A neighbour who pleaded anonymity said he had seen the deceased arrive at the office building situated behind the CUA Building about 4 a.m. in a taxi.

'He was in the car for about 10 minutes and then later got out and went to his office. He was in T-shirt and boxer's shorts,' the neighbour said.

A friend and neighbour of Yawson-Adjei, Mr Dan Agyekum, who was distraught at the turn of events, said he was yet to  understand the cause of his friend's death.

'Just last Thursday he signed my daughter's university forms,' he said, and added: 'I even saw him on Friday and we chatted.'

Yawson-Adjei , he said, did not show any sign of having a problem.

Co-worker
Mr Emmanuel Larweh, a surveyor who worked with Yawson-Adjei in the same building, told the Daily Graphic that Yawson-Adjei looked hale and hearty when he saw him last Friday, September 20, 2013.

'He even handed over my portion of the scripts to be marked,' he said.