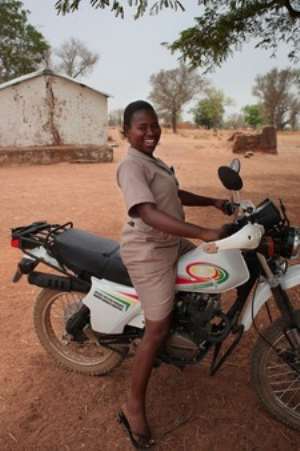 They expressed concern that the issue was serious because health workers found it difficult to reach communities to administer health care, particularly pregnant women.

The stakeholders,  in a communiquÃ©, stressed the need for government to exempt  health workers in the area  from the ban  to enable them deliver health services to the people

The forum,  which was under the ISODEC 'SIMAVI' project,   attracted stakeholders in health including civil society organizations, Coalitions of NGOs in Health , Community Based Organizations and staff from the Ghana Health Service to brainstorm on how to address the problem of  the refusal  of health service personnel to accept posting to  deprived areas.

The communiquÃ© said lack of health personnel in rural and deprived areas was attributed to political influence.  It said majority of the health personnel posted to such areas used politicians to influence the Ministry of Health and the Ghana Health Service to change their postings.

'This is seriously affecting and undermining effective health delivery in rural and deprived areas,' it said.

The communiquÃ© called on government to as a matter of urgency intervene in the matter to stop the practice or else government's  dream of achieving the Millennium Development Goals $ and 5 would be hampered.

' There  is also  the need for management of health institutions and head of  health directorates to instill discipline and be firm in taking decisions  to ensure that  health personnel are equitably posted and to take punitive measures against those who refuse posting to their respective areas,' it said.

The communiquÃ© said rural areas were the most areas that demanded greatly health professionals particularly in the Community Based Health Planning Centres(CHPS), therefore   'it is  quite alarming that sometimes none of the health personnel deployed to such areas refuse  posting to such areas without any tangible reasons.'

The communiquÃ© appealed to the government to task Metropolitan, Municipal and District assemblies to build more CHPS Compounds to improve access to healthcare.

It called on NGOs, CSOs and non-state actors to support the training of more health personnel help in the provision of residential accommodation and provision of motorbikes to health staff.