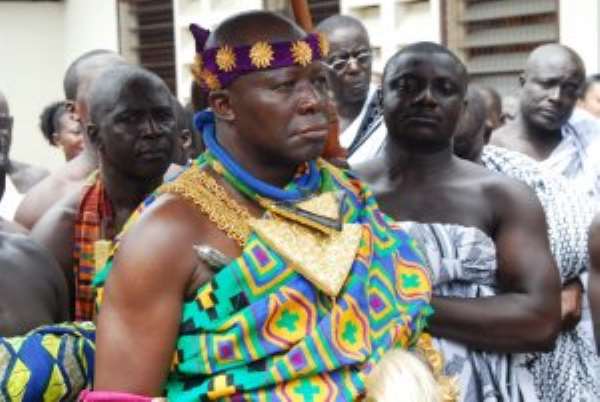 There is every indication that fate has not been very kind to Asantehene Otumfuo Osei Tutu II, formerly Mr Kwaku Duah. It seems any attempt he makes to bend fate to suit him instead of allowing it to take its natural course backfires on him. What a hard luck he is confronted with? Why is good luck almost constantly eluding him?

Respect is earned but not commanded. Once a king loses the respect and allegiance of his subjects, he is worse than salt that has lost its sweetness. When salt loses its sweetness, it is not worth keeping it but to throw away, so the bible says. When a king's integrity is called into question, let alone being rampantly slurred for his alleged vicious life, his position as an Overlord becomes untenable.

The rate at which Asantehene is being persistently castigated by his own subjects with unprintable or demeaning words and statements on the airwaves signifies that he has lost his entire respect and credibility in the eyes of these people. His own Asante subjects feel betrayed by him if indeed; he acted collusively irresponsibly to have Justice William Atuguba and his other Supreme Court judges that sat on Election 2012 petition to rig the verdict in favour of John Dramani Mahama. All that I, an observer, of the Court proceedings on real-time telecast can say without fear or favour, is that the verdict by the Supreme Court was as irresponsible and corrupt as the personae of some of the judges were.

It hurts to tell the truth but in the end it brings comfort. I am strongly of the opinion that those suggesting Asantehene abdicates following his never-ending ill- fate that denigrates the Golden Stool that he occupies and Asanteman are perfectly right. The good name of the stool and Asanteman must not be dragged in the mud by the unfortunate acts of either an insatiably greedy, or ill-fated, person. "Good name is better than riches" - understood?

You can take away someone's life but you can never touch or take away their opinion. No matter how Asantehene and his advisers may feel, majority of the Asantes both at home and abroad, feel they have been let down big time by the sitting Asantehene. When a section of the Zongo boys seized Kumasi in a broad daylight terrorising the innocent citizens, stealing their money and wares, the Asante Overlord was nowhere to be found. When Ashanti region was used to test the NHIS pilot scheme by the Mills-led NDC government that led to many deaths, he is accused of sitting down nonchalantly while deaths took place in the hospitals at shocking unprecedented rate.

His own Asante subjects are doubting his sincerity when he called the Kumasi Conference that was attended by all stakeholders except Dr Kwadwo Afari Gyan, prior to election 2012. At the Conference, he advised all stakeholders to accept the results of Election 2012 regardless of the form it would take. He is alleged to be a staunch NDC member. Did he know that the election would be rigged in favour of one candidate or the other? What was his motivation for calling such a Conference? In the end, the election was found rigged. Did he ever utter in soliloquy why Nana Akufo Addo was pursuing Supreme Court action while he had promised to agree to whatever the election results would be at the Kumasi Conference? If he did, he should question his own conscience as to why he said that?

Again, why was he eager to impress upon the stakeholders to promise to accept the Supreme Court verdict whatever it would be? Similarly, the verdict was corrupted in favour of John Dramani Mahama. These things do not add up. They are questionable. They raise suspicion about the intention of the proponent of the Conference since he is himself a member of the NDC party and the results are always rigged in his party's favour. This is the view of many an Asante person.

If you cannot change the mind-set of your subjects to follow what you want as it obligatorily obtained in the ancient times, where whatever the king said became the order of the day, then you should not seek to undermine them. In these modern times, the subjects have the right to think independently to decide what is good for them without any hindrance from whomever.

The Asantes seem to have had enough of the ill-fated mannerisms of their sitting King. They think his actions have compromised the integrity of the stool he occupies and Asanteman as a union. Who am I to stop them if they feel their King should abdicate to save the kingship from further degeneration?

Please Ashantis, I plead with you to give him the last chance before initiating any moves to boot him out of the Manhyia Palace. Who tells you Asantehene cannot be removed from the throne? I shall name three of them that were kicked out in the ancient times when their behaviours were deemed ridiculously condemnable.