By Peter Martell and Aymeric Vincenot 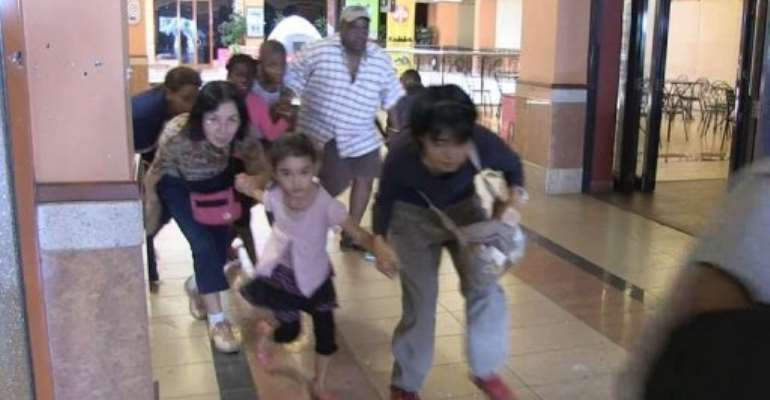 Sporadic gunfire rang out as Kenyan security officials said they were trying to kill or capture the remaining attackers and end the bloodbath at the upmarket Westgate mall, with the standoff now well into a second day.

"The criminals are now all located in one place within the building... we have as good a chance to successfully neutralise the terrorists as we can hope for," President Uhuru Kenyatta said in a speech to the nation.

Kenyatta, who called for patience, said he had received "numerous offers of assistance from friendly countries" but that for now it remained a Kenyan operation.

However, a Kenyan security source confirmed that Israelis "are rescuing the hostages and the injured". The Israeli foreign ministry refused to confirm or deny its forces were involved.

Terrified witnesses recounted scenes of horror as the masked gunmen tossed grenades and sprayed automatic gunfire in the packed centre in a brazen attack around midday on Saturday, sending panicked shoppers fleeing for their lives.

Kenyatta said 59 people were confirmed dead, while the Red Cross has estimated the number of injured at around 200, with 49 others missing in the more than 30-hour-siege.

Somalia's Al Qaeda-inspired Shebab rebels said the carnage at the partly Israeli-owned complex was in retaliation for Kenya's military intervention in Somalia, where African Union troops are battling the Islamists.

"They shall not get away with their despicable and beastly acts," Kenyatta said in an emotional speech. "We will punish the masterminds swiftly, and indeed very painfully."

More than 1,000 people have been rescued, but between 10 to 15 attackers -- reportedly both men and women -- are holding out in the multi-storey complex "as well as many unarmed, badly shaken, innocent civilians", Kenyatta said.

Kenyatta said a nephew and his fiancee were among those killed.

The dead also included three Britons, two French citizens, two Canadians including a diplomat, a Chinese women, two Indians, a South Korean, a South African and a Dutch woman , according to their governments.

Also killed was Ghanaian poet and former UN envoy Kofi Awoonor, 78, while his son was injured.

The attack, the worst in Nairobi since an Al-Qaeda bombing at the US embassy killed more than 200 people in 1998, was condemned by world powers.

Vice President William Ruto has asked the International Criminal Court to delay his trial for crimes against humanity over deadly 2007-08 post-election violence because of the mall standoff, his lawyer said.

After a day and night of sometimes ferocious gun battles, security sources said police and soldiers had finally "pinned down" the gunmen.

"We are still battling with the attackers and our forces have managed to maroon the attackers on one of the floors," said Kenyan military spokesman Colonel Cyrus Oguna.

Mall worker Zipporah Wanjiru, who emerged from the ordeal alive but in a state of shock, said she hid under a table with five other colleagues.

"They were shooting indiscriminately, it was like a movie seeing people sprayed with bullets like that," she said, bursting into tears. "I have never witnessed this in my life. Only God can heal us and our country."

Cafe waiter Titus Alede, who risked his life and leapt from the first floor of the mall, said it was a "miracle from God" that he managed to escape the approaching gunmen.

"I was serving a client and these men came. They were not after money as they were shooting people without asking for anything. I remember them saying 'you killed our people in Somalia, it is our time to pay you back'," he said.

One teenage survivor told how he played dead to avoid being killed.

"I heard screams and gunshots all over the place. I got scared... (and) hid behind one of the cars," 18-year-old Umar Ahmed told AFP.

In the hours after the attack began, shocked people of all ages and races could be seen running from the mall, some clutching babies, while others crawled along walls to avoid stray bullets.

Kenyan police, troops and special forces then moved in and went shop-to-shop.

Foreign security agents -- from Israel as well as the United States and Britain -- were also seen in the mall, which is popular with wealthy Kenyans and expatriates.

An AFPTV reporter said she saw at least 20 people rescued from a toy shop, some of them children taken away on stretchers.

Shebab said the attack was retaliation for Kenya's nearly two-year-old military presence in war-torn Somalia in support of the internationally-backed government.

"If you want Kenya in peace, it will not happen as long as your boys are in our lands," spokesman Sheik Ali Mohamud Rage said in a statement.

The group also issued a string of statements via Twitter, one of them claiming that Muslims in the centre had been "escorted out by the Mujahideen before beginning the attack".

Israeli interests in Kenya have come under attack before. In November 2002 there were two simultaneous attacks in the Mombasa area. A missile targeted an Israeli charter flight as it took off from the port city's airport, but missed.

At the same time a car packed with explosives smashed into the Paradise hotel, the only Israeli-owned hotel in the Mombasa area, as Israeli tourists were checking in. Ten Kenyans and three Israelis died.