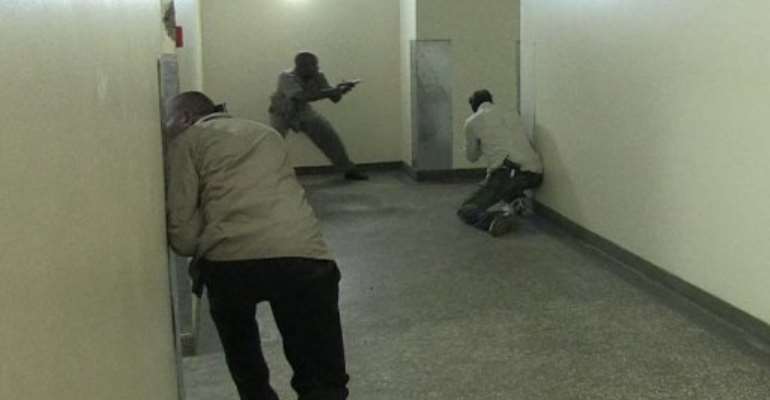 NAIROBI (AFP) - Fierce gunfire could be heard coming from inside Nairobi's Westgate shopping mall Sunday, an AFP correspondent at the scene said, as the Red Cross said 43 people had been killed and 200 injured in an attack by gunmen.

Kenyan security forces have been battling to end the siege in the upmarket mall for more than 20 hours, after fighters from Somalia's Al Qaeda-linked Shebab group stormed the mall.

A security source confirmed that heavy exchanges of gunfire were taking place.

More ambulances were also arriving at the scene of the stand-off, the AFP correspondent said.

Somalia's Al Qaeda-inspired Shebab rebels said the carnage at the part Israeli-owned Westgate mall was in direct retaliation for Kenya's military intervention in Somalia, where African Union troops are battling the Islamists.

Kenyan President Uhuru Kenyatta said in a televised address to the nation that he had "personally lost family members in the Westgate attack", but said the country had "overcome terrorist attacks before, and we will defeat them again."

"Let me make it clear. We shall hunt down the perpetrators wherever they run to. We shall get them. We shall punish them for this heinous crime," he said, adding: "Terrorism is a philosophy of cowards."

Kenyan police described the attackers as a well-organised "terror gang" numbering around 10.

The Westgate mall is popular with wealthy Kenyans and expatriates, and was packed with around 1,000 shoppers when the gunmen marched in at midday, tossed grenades and sprayed automatic gunfire.

Earlier after hours of sometimes ferocious gun battles, security sources said police and soldiers had finally "pinned down" the gunmen and managed to evacuate hundreds of shoppers and staff.

"The work is continuing, but you cannot rush these things," said an army officer posted on the perimeter cordon set up around the mall.

"Our teams are there, we are watching and monitoring, we will finish this as soon as we can," he told AFP.

One teenager recounted to AFP how he played dead to avoid being killed.

"I heard screams and gunshots all over the place. I got scared. I tried to run down the stairs and saw someone running towards the top, I ran back and hid behind one of the cars," he said from his hospital bed at MP Shah Hospital, where he was nursing burns to his hands and chest.

A spokesman for Shebab said the attack was a response to Kenya's nearly two-year-old military presence in war-torn Somalia in support of the internationally-backed government.

"We have warned Kenya of that attack but it ignored (us), still forcefully holding our lands... while killing our innocent civilians," Shebab's spokesman Sheik Ali Mohamud Rage said in a statement.

"If you want Kenya in peace, it will not happen as long as your boys are in our lands," the statement said.

The group also issued a string of statements via Twitter.

"The Mujahideen entered #Westgate Mall today at around noon and are still inside the mall, fighting the #Kenyan Kuffar (infidels) inside their own turf," the group said, before the account was suspended by Twitter.

The rebels said Muslims inside the centre had been "escorted out by the Mujahideen before beginning the attack."

The gunmen were "holding their ground. All praise is due to Allah!", the group said.

The attack was the worst in Nairobi since an Al-Qaeda bombing at the US embassy killed more than 200 in 1998.

Shocked people of all ages and races could be seen running away from the mall, some clutching babies, while others crawled along walls to avoid stray bullets.

A shop manager who managed to escape said at one point "it seemed that the shooters had taken control of all the mall".

"They spoke something that seemed like Arabic or Somali," said a man who escaped the mall and gave his name only as Jay. "I saw people being executed after being asked to say something."

Kenyan troops went shop-to-shop inside the shopping centre and were joined by special forces. Foreign security officials -- from Israel, the United States and Britain -- were also seen at the complex.

An AFPTV reporter said she saw at least 20 people rescued from a toy shop. Dozens of wounded, some of them bleeding children, were taken away from the mall on stretchers.

Police at the scene said a suspect wounded in the firefight had been detained and taken to hospital under armed guard, but that he later died of his injuries.

Kenneth Kerich, who was shopping when the attack happened, also described scenes of utter panic.

"I suddenly heard gunshots and saw everyone running around so we lied down. I saw two people who were lying down and bleeding, I think they were hit by bullets," he said.

An eyewitness who survived the assault said he saw the body of a child being wheeled out of the mall.

"The gunmen tried to fire at my head but missed. I saw at least 50 people shot," mall employee Sudjar Singh told AFP.

Vehicles riddled with bullet holes were left abandoned in front of the mall as the Red Cross appealed for blood donations and police instructed Nairobi residents to stay away.

Security agencies have regularly included the Westgate shopping centre on lists of sites they feared could be targeted by Al Qaeda-linked groups.

Paris confirmed that two French citizens were among those killed in what it condemned as a "cowardly" attack. Canada's Prime Minister Stephen Harper said two Canadians, one of them a diplomat, were also among the dead.

The United States said its citizens were reportedly among those injured and the White House condemned the "despicable" act.

British Foreign Secretary William Hague said that there were "undoubtedly British nationals caught up in this so we should be ready for that".

UN Secretary-General Ban Ki-moon was following the attack "closely and with alarm", a statement from his office said.

The UN Security Council also condemned "in the strongest possible terms" the attack.