At least 30 killed in Somalia restaurant bombings claimed by Islamists 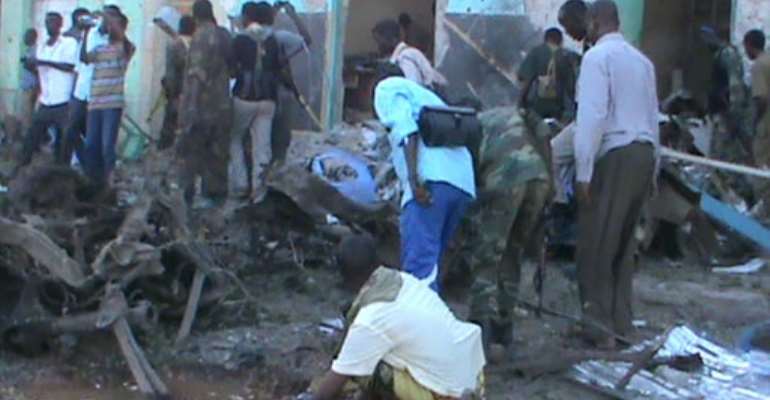 People and soldiers search in the rubble of a destroyed building on February 28, 2016 in Baidoa after twin explosions in the Somali city killed at least 30 people. By - (AFP)

Mogadishu (AFP) - At least 30 people have been killed in twin bomb attacks claimed by Shebab Islamists at a busy restaurant in the Somali city of Baidoa, the regional governor said Monday.

"The official number of the dead has reached 30 people -- all of them civilians -- and 61 others have been wounded, 15 of them seriously," Abdurashid Abdulahi, governor of Bay region, told AFP.

An initial car bomb struck a popular restaurant in a busy part of the regional capital on Sunday afternoon, with a suicide bomber nearby hitting people as they fled the area.

"The explosion occurred in a densely populated area," said Abdirahman Ibrahim, a police officer in Baidoa.

Another policeman, Abdi Hared, said there were "twin blasts" from a car bomb and a suicide bomber.

The explosions shredded the roofs of nearby buildings, tore chunks out of vehicles and left bodies, plastic chairs and tables strewn across the road.

"The mujahideen carried out two massive explosions in Baidoa targeting restaurants used by members of the apostate South West Administration," the Shebab said in a statement.

The regional administration in Baidoa is protected by troops of the 22,000-strong African Union Mission in Somalia (AMISOM), which is supporting the internationally-backed government of Somalia.

The African Union's top official for Somalia, Francisco Caetano Madeira, condemned Sunday's attack. "I am saddened by the loss of innocent lives through acts of terror committed by ruthless individuals who have no value for life," he said.

On Friday Shebab gunmen stormed a hotel in the capital Mogadishu and bombed a nearby park killing at least 14 people and wounding 18.

Forced out of Mogadishu in mid-2011, the Shebab are on a mission to disprove suggestions they are close to defeat and have claimed several spectacular attacks in recent months, both in Somalia and in neighbouring Kenya.

On Sunday leaders and officials from the countries contributing troops to AMISOM met in Djibouti for a summit after the European Union announced plans to reduce its funding of the force by 20 percent.

"Whereas the continent is footing the bill of stabilising Somalia by blood and flesh, it is disheartening that the international community is even contemplating to reduce support to AMISOM," Kenyatta said.

Ejura probe: Ministerial Committee presents its report to In...
7 minutes ago