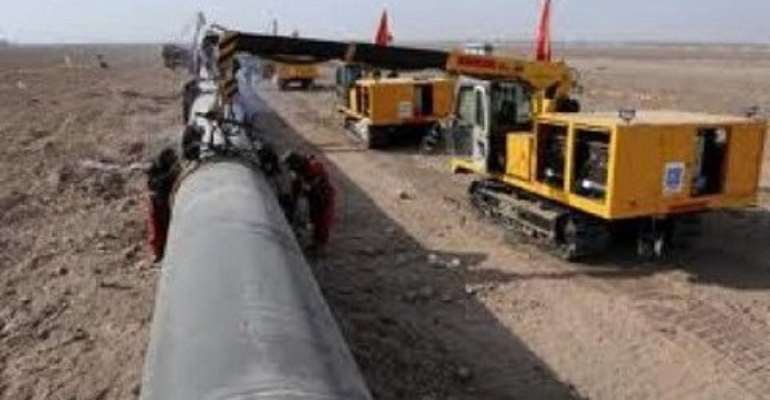 Ghana's energy challenges are set to linger on for a longer time as work on a crucial natural gas pipeline project won't be complete until April, 2014, deputy Energy Minister John Jinapor, has said.

The undersea pipeline which runs from the offshore Jubilee field to a thermal plant near the port city of Takoradi has been hit by funding and other delays.

"By the end of Q1 the facility should be ready. Within Q2 we should be producing gas," Deputy Energy Minister John Jinapor told Reuters in London on Wednesday.

The pipeline was supposed to begin conveying gas this year but the completion of work on the protect was delayed until January.

A cargo vessel bringing equipment for the gas rig sank at sea, which is one reason for the delay, and it costs the government about $12 million per month in light crude used to make up the gas shortfall, he said.

The pipeline is funded through a loan from the China Development Bank and a further cause of the delay has been holdups in disbursement of the loan with $500 million of $850 million received to date, Jinapor said.

Ghana is considered one of Africa's brightest economic prospects because of its stable democracy and exports of cocoa, oil and gold but frequent power cuts raise costs for industry and depress consumer purchasing power.

"Contractor companies raised invoices and process them for payments ... We had a bit of a challenge with the payment but we are now on course. It was a procedural, a bureaucratic problem," Jinapor told Reuters.

President John Mahama this week named a new board for the Electric Company of Ghana (ECG), after it came in for fierce criticism from the World Bank and others for mismanagement that contributes to the country's power crisis.

"We've set up a business strategic unit at ECG. We are still in the process of restructuring it and making it more responsive to the needs of the people," Jinapor said.

In another blow to the country's power production, a ship last August accidentally cut the undersea West African Pipeline Company pipe that brings gas from Nigeria causing supply interruptions to Benin and Togo as well as to Ghana.

The pipe was fixed in July but Jinapor acknowledged supply since then has been unreliable.

"Ultimately our vision is to have our own gas infrastructure, but we will continue our engagement with Nigeria to ensure they take into account their obligations on all sides," Jinapor said.

The company has said it will sell down its stake but Jinapor refused to be drawn on whether the Ghana National Petroleum Corporation would seek to increase its holding which currently stands at 13.6 percent.

"The maximum Jubilee should produce is about 120,000 barrels per day ... Currently we are doing about 110,000 barrels. Very soon we should be able to get up to capacity. By the middle of next year," Jinapor said.