Doe Adjaho sworn in as President 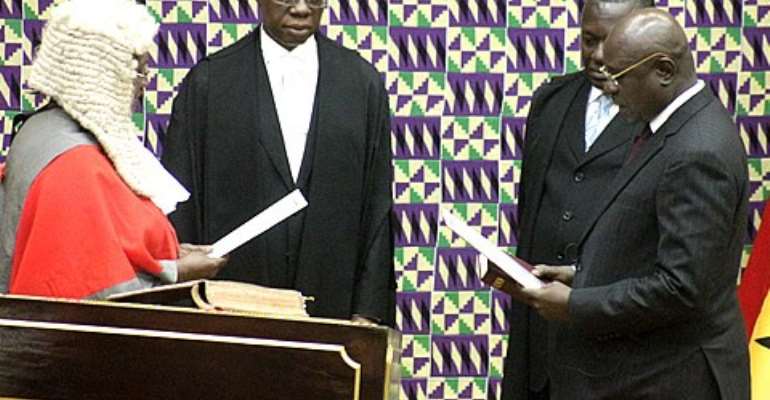 The Speaker of Parliament, Mr Edward Doe Adjaho has been sworn in as Acting President by the Chief Justice, Mrs Georgina Theodora Wood with the Minority shouting 'reshuffle Presidooo.'

Mr Adjaho swore the Oath of Allegiance and the Presidential Oath to dedicate himself to the service and well-being of the people of Ghana, do right to all manner of persons, to submit himself to the laws of Ghana and suffer the penalties should he, at any time, break the oaths.

The Majority Leader, Dr Benjamin Kuunbuor, said the ceremony was a sign that the country's constitutional arrangement was of age and maturing and appealed to Mr Adjaho to put down the cloud around him as a Speaker and assume the mantle as President, prepared for any eventuality. He alsocommended members for rising to the occasion.

Minority Leader, Mr Osei-Kyei Mensah-Bonsu congratulated Mr Adjaho for his assumption to the highest office of the land and appealed to the Clerk of Parliament to make available copies of the agenda to members in the event of such recalls to enable members to prepare for the issues to be discussed.

The House is adjourned sine die

Demonstrate diligence and honesty in your work – Outgoing KM...
15 minutes ago