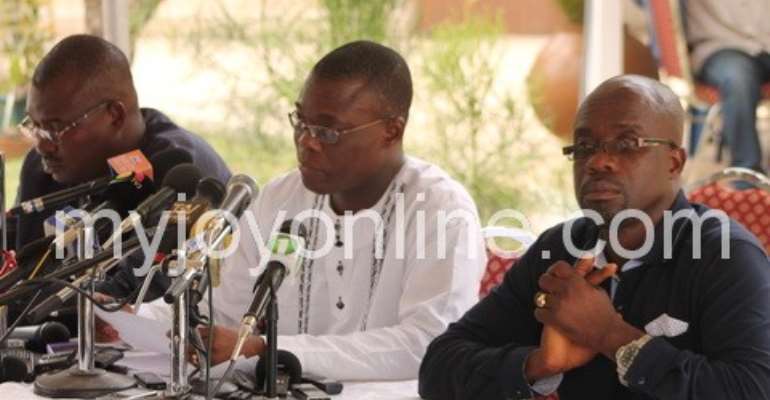 The Minister of State in charge of Financial and Allied Institutions, Fifi Kwetey says the greed and shortsightedness of the local banks is to blame for huge gap between lending rates and interest on bank deposits.

Mr. Kwetey was speaking to journalists at the launch of a new branch of Union Savings and Loans at Ashaiman in Accra.

The Minister noted that the banks had in the past given a plethora of excuses as to why they were unable to reduce lending rates but he argued that, even when the conditions were favourable, the banks still maintained their high lending rates.

“This is greed - that's what it is – greed – plain greed. It is an indication of their obsession with short-term profits to the detriment of the greater majority of Ghanaians and the entire economy. And it is short-sighted because in the long-term it is counterproductive,” he stated.

The Minister noted that the banks had over the year hopped from one excuse to the other; they first blamed the high lending rate on high Prime Rate set by the regulator. When the prime rate came down to a little over 13%, then the banks shifted the blame to high Treasury Bills which also reduced to 9.1% in 2011. However, in all those circumstance the banks maintained their high lending rates, Mr. Kwetey asserted.

He said recently the banks are blaming the high lending rates on a high number of non-performing loans (loans that are not being repaid), which, according to him is just another excuse to exclude the greater majority from accessing funds and continue lending to only the large-scale sector and to individuals with very high net worth.

“What is happening is an extreme obsession for short-term profit – and that means keep the savings rate low - make the lending rate high and make profit not on the back of larger transactions and higher creativity and productivity but just by driving the prices.

“No economy can sustainably grow and over a long term, see transformation and development if the focus is always on prices and an obsession with short-term profitability,” he said.

Fifi Kwetey observed that over 60% of the economy comprises small and medium scale (SME) players, but the banks focus on the 20% of the economy in the large-scale and high net worth bracket, saying that the policies, products and services of the banks fuel financial exclusion rather than inclusion.

“What they are doing is [that] they are reducing both the inflow in terms of savings and outflow in terms of loans and preventing the greater majority of Ghanaians from having access to credit and banking services – when it is that they can actually adopt policies that would help more small business grow so they [the banks] would make their money from the volumes of transaction then it becomes a win-win situation,” he said.

He said government could not compel the banks to change their focus, but could only create the environment that would drive competition and incentivize the banks to comfortably focus on the long-term benefits of their operations for themselves and the entire economy.

Government has recently introduced the Financial Sector Strategic Plan (FINSSP), specifically to broaden and deepen the sector, and financial inclusion forms a critical part of that goal, but the banks also cite the fiscal environment characterized by government's penchant for increasing taxes as one of the reasons they are unable to risk certain level's of credit to the larger majority of the SME sector.

Chairman and CEO of UT Bank, Prince Kofi Amoabeng told ADOMBUSINESS the banks are in business to make profit and pay their shareholders, savings customers, staff and other stakeholders so they cannot take risks with people's money.

“If we do your credit rating and you do not deserve a certain level of loan we cannot advance it to you just because we want to give out loans,” he said.

“We need to be sure that people we give money to are as committed to repay like we are committed to give the loan,” he added.

On the questions of low interest on savings vis-à-vis high lending rates, Kofi Amoabeng said over 70% of people who save with UT Bank demand savings rates more than the TB rate (currently over 22%), “and we pay them that much so if we also lend their money out we need to charge above the TB rate so we can pay our customers.”

He also explained that currently the BOG regulates the base rate of every bank, which is calculated on the basis of specific factors, and the BOG insists that no bank should offer lending rates below their base rate so if any bank offers lower lending rate it would be in violation of BOG regulations.

“Currently UT's base rate is 27% so we cannot lend at a lower rate than that. Maybe there are banks which have base rates lower than the TB rate so they may be able to lend at the TB rate but we cannot by law,” he said.

Meanwhile, Chief Executive of the CDH Group, Emmanuel Adu-Sarkodee agrees with the Minister's assertion that the gap between savings rate and lending rate is way too wide and the banks would need to be “fair” to their customers, particularly when a customer saves with the bank and also goes there for a loan.

Finance Expert, Dr. Theo Aggrey also agreed with the Minister, saying that BOG needed to insist on policies that would abolish the COT charges (reduction banks make on current account) because that is going away around the world but some Ghanaian banks continue to charge COT.