Rethinking Our Path To National Development--Part 5 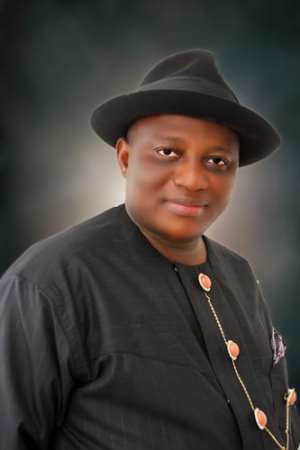 This segment is focused on what Obasanjo did in Nigeria to vitiate President Jonathan's ascendancy to power in 2011 and what he is doing to fight against Jonathan's second term Presidency.

Dr. Alex Ekwueme one of the founding fathers of the PDP said this much: 'Let it be known that it will be unconscionable to tell an incumbent Presidentnot to contest an election, which he's constitutionally qualified to contest especially given the fact that his zone has never held power'

President Jonathan assumed power following the demise of Ya'Adua. The National Assembly invoked the doctrine of necessity and removed the obstacles for the first Niger Deltan to be President of the Federal Republic of Nigeria. Ever since President Jonathan completed Yar'Adua's tenure, Obasanjo moved against him. OBJ. has never wanted Dr. Goodluck Jonathan to continue in office hence he became a foremost advocate of zoning and rotational presidency in a bid to wipe up sentiments against Jonathan. He never buttressed this argument when he sought a third-term bid but failed.

Thereafter, he surreptitiously persuaded all opinion leaders in the South West to vote for a different party having lured Chief Bode Judge into jail. He Obasanjo could have prevented the imprisonment of Chief Bode Judge - who is widely acknowledged to be a PDP Chieftain. It was he ObJ who even orchestrated Iyabo Obasanjo his own daughter to fail in order to use it as a smokescreen to buttress the fact that PDP was very weak in the South West. Obasanjo has never liked Jonathan because in his own weird thinking, OBJ has never allowed anyone to outshine him. Those who served in the military with him can attest to this fact. The public can now understand why President Goodluck Jonathan refused to accept the nomination of Iyabo Obasanjo as Junior Minister.

OBJ's eight years term was in every sense a disaster. The period witnessed the destruction of several towns and villages. Odi, Okerenkoko, Agge, Odioma, Obasanjo's privatization exercise was a disaster partly because he entrusted the task to the Vice President Alhaji Atiku Abubakar. Atiku being a very smart thieve, hoodwinked his master by privatizing all the choice property into his pocket. This was the real reason OBJ never wanted Atiku to succeed him as President.

Those who believe in the BORN TO RULE hypothesis would argue strenuously that President Goodluck Jonathan has not lived up to expectation even though his midterm report in May 2013 says otherwise. Every objective analyst will concede that President Jonathan's predecessor for 8 years awarded a power supply contract of over $16 billion yet nothings substantial came out of such contracts yet the same clique of failed leaders are unashamedly heaping the developmental challenges of the nation on the shoulders of President Jonathan.

In the past two decades, Nigerian airports were decaying. Today, the difference is getting clear but President Jonathan has not done 2/3rds of his first tenure. The administration at the end of 2011 earmarked 22 airports for rehabilitation and reconstruction and by the end of October 2012, over 50 percent had been commissioned for public use with. The remaining eleven would be completed in 2013. The Akanu Ibiam International Airport, Enugu has already been commissioned. This is in addition to remodeling of some airports. The Jonathan administration has approved the sum of N106 billion for the construction of five new airport terminals in Lagos, Kano, Port Harcourt, Abuja and Enugu as well as six cargo terminals to be managed under a Public Private Partnership (PPP) Scheme. If I may ask, what did Obasanjo achieve in aviation when he was President for eight years? Now these same people are instigating failed politicians to resist President Jonathan's second term in office. In the day, OBJ pretends to be a statesman but in the night, he wears the toga of a double-edged sword, cutting both ways.

In the area of insecurity, past administrations did not face the menace of Boko Haram - which is the political wing of those who lost out in the power equation. They floated the Boko Haram insurgency because of two reasons: namely to distract the attention of the President from executing the Transformation Agenda and to harass the President to degenerate into an ethnic President. However, Mr. President has towered over and above all these antics to deservedly assume the stature of a statesman and patriotic Nigeria. Another good thing is that President Jonathan does not nurture the ambition of a third term; he will only do the constitutionally provided second term.

One of the destabilizing factors in the present PDP is former President Olusegun Obasanjo. President OBJ spent the better part of his first term gallivanting around the world under the guise of scouting for investors. OBJ compromised the support given the Party by the founding fathers of PDP. It was he OBJ who rubbished and torpedoed the idea of rotational Presidency or zoning in pursuit of the misadventure - third term ambition. Obasanjo's electoral reform was prompted by his attempt to expunge the part of the Constitution that provided for two terms for the President. This plan fell through. It was President Jonathan who took the saddle after the demise of Yar'adua that brought these reforms to fruition. The same thing is happening in the power sector reforms.

The so called New PDP faction led by Kawu Baraje is an invention of OBJ to find an avenue to re-launch himself to relevance after he lost the bid to become the BoT Chairman of the PDP. OBJ saw this as a humiliation and because he does not have the spirit of forgiveness, he clandestinely backs the breakaway faction of the PDP. This plan too will fail.

President Jonathan has achieved in two and a half years what OBJ could not achieve in eight years. On electoral reforms, President Goodluck Jonathan has to a great extent sanitized the system. The reform carried out in this sector is responsible for the conduct of elections assessed by local and international observers as credible, free and fair. He has given the Nations electoral body a free hand to carry out its statutory duties without any form of direct or indirect manipulation. It takes a man who is committed to eradicating political corruption to do this in view of the apparent desperation of some politicians to capture power at all cost. In this area, OBJ failed woefully. Obasanjo muzzled freedom of expression hence he could not sign the Freedom of Information Bill into law. President Jonathan did.

Another area where the Jonathan administration has since its inception been concerned is securing convictions of suspects accused of economic crimes within a reasonable time frame. While swearing in of Justice Miriam Aloma Mukhtar as Chief Judge of the Federation in July 2012, President Jonathan admonished the new CJ to consider the creation of special courts and designation of special judges to adjudicate on corruption cases. OBJ only used the EFCC and the judiciary to execute selected prosecution of perceived political opponents.

President Jonathan did not stop at that, he initiated a reform of the criminal justice system as a means of plugging loop holes often exploited by counsels to delay trial of persons accused of corruption. The office of the Attorney General and Minister of Justice has completed a new set of proposals which has been sent to the National Assembly. This bill, when passed into law, will remove incidence of frivolous injunctions, interlocutory motions, adjournments and other abuse of court processes by counsel employed by suspects in corruption. The sweeping reforms in the judiciary are eloquent testimonies to the fact that President Jonathan is determined to transform Nigeria.

To be Contd.
N/B: Senator Ahmed Bola Tinubu is an economic opportunist whose only sworn affidavit is self-aggrandizement and empire building. He has already achieved that in Lagos. He hopes to achieve this on a national scale by fraternizing with past military leaders who raped the economy and now control a huge chunk of the oil blocks belonging to the people of the Niger Delta. People of such character can only mortgage the destiny of the children. This is what the youths of Nigeria will resist.

The boo is the truest voice of the people; not the selfish c...
7 minutes ago

Our SinoHydro road projects has silence NDC, when we talk th...
30 minutes ago