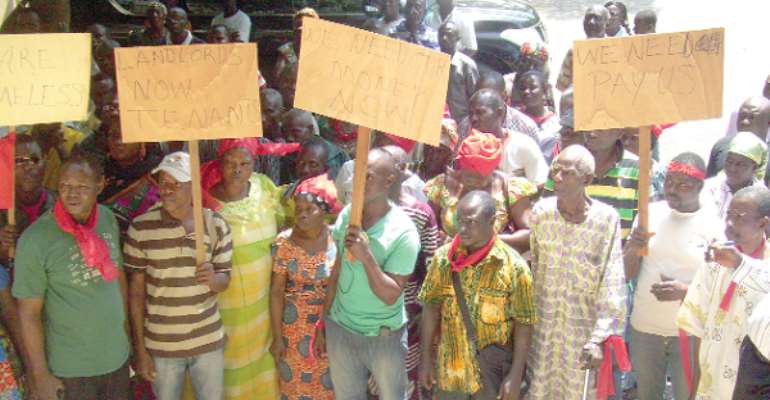 Project affected persons (PAPs) on the Suhum-Nsawam road have threatened to block that stretch of the Accra-Kumasi Highway over what they describe as frustration surrounding the payment of compensation to them.

According to the Spokesman for the group, Mr Owusu Dome, those whose structures were affected by the road construction had not yet been paid, a situation which he said had made many of them worried.

He said the group would, tomorrow, September 20, 2013, storm the offices of the Ghana Highway Authority (GHA) and the Land Valuation Board (LVB) for answers.

'If this fails to address our problem, we will block the Kumasi Highway,' he stated.

The controversy
Payment of the long-awaited compensation began on September 12, this year, after four years of waiting, but the hopes of the group were dashed when they were told by officials of the GHA effecting the payment that only those whose crops were destroyed during the road construction would be paid.

Even for the farmers, according to Mr Dome, GHA officials demanded receipts for the initial part payment, which many of the farmers were unable to produce.

'Because of this, more than 50 farmers have not been paid, even though their names are included in the list for payment,' he stated.

Many of the affected people have besieged the construction site of the contractor, the China Water and Electric Company Limited, in Suhum, where the money is being paid, but majority of them, according to Mr Dome, had been turned away because they could not produce receipts for the initial part payment.

The blame game
Mr Dome blamed the LVB for the present predicament of the affected people.

According to him, just when the group thought all was well, the board submitted new values on August 26, this year which were far less than what the GHA had earlier offered them and even paid part.

He said the group vehemently protested the new values, adding that even though clearance was given for the old GHA values to be maintained, that interruption had greatly affected the payment.

GHA's response
That assertion was, however, refuted by the Director of Public Affairs at the GHA, Mr Norbert Kuamoh, who told the Daily Graphic that 200 farmers had so far been paid, out of the 300 on the GHA's list.

'Our insistent on the receipt is part of the procedure but those who did not have were identified by the assembly member for the area and they have been paid,' Mr Kuamoh stated.

All the affected persons have been paid some amount of compensation earlier and the GH¢23,11,449 released by the Ministry of Finance and Economic Planning (MoFEP) recently is to settle the final payment.

He said aside from the receipts, the team, made up of an official from the GHA, a valuer, an accountant and a cashier, was also identifying the people by their thumbprints, signatures and passport size pictures as captured in the receipt books for the initial payment.

Mr Kuamoh indicated that some of the affected persons were trying to take advantage of the situation to collect more than what was due them, hence the checks and balances adopted by the team.

He gave an assurance that all those affected would be paid the amounts due them and appealed to them to exercise some patience.

He said payment to the farmers was the beginning, adding that those whose structures were affected would also be sorted out progressively.

The compensation
More than 600 property owners who were affected by two major road projects by the GHA were to receive close to GH¢32 million. The warrant for the payment was issued by the MoFEP on August 5, this year.

The amount covers both the GH¢23,11,449 owed affected persons on the Suhum-Nsawam road and the GH¢8,598,676 owed to those on the Madina-Pantang stretch.

The warrant was sent to the Controller and Accountant-General's Department (CAGD) for processing, which also took some weeks and resulted in yet another agitation over delays by the group on the premises of the department some few weeks ago.

The money, which has been outstanding since 2005, will be paid to property owners whose structures were demolished during the construction of the Accra-Kumasi Highway Lot 6 Kwafokrom-Apedwa, the Tetteh Quarshie-Mamfe road and Madina-Pantang road.

Meanwhile, construction work on the two projects is ongoing.

The 31.7-kilometre Nsawam-Suhum project, according to the Chief Executive Officer of the GHA, Mr Michael Abbey, in an earlier interview, was about 50 per cent complete, while the Madina-Adenta stretch was nearing completion, as about 95 per cent of the work had so far been completed.

Demonstrate diligence and honesty in your work – Outgoing KM...
14 minutes ago