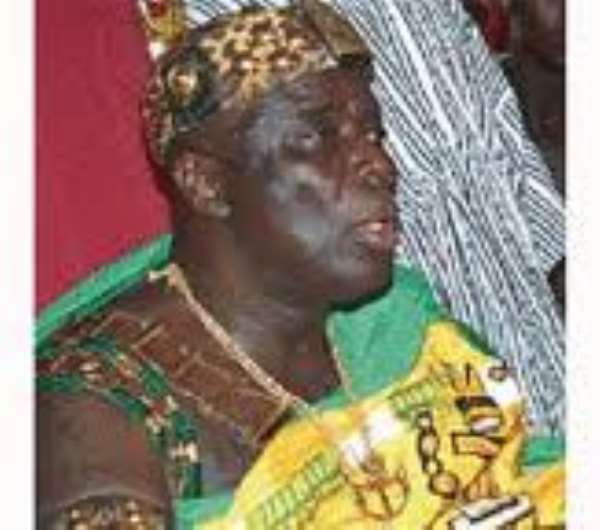 Accra, Sept 18, GNA - The Okyenhene, Osagyefo Amoatia Ofori Panin, has started a sanitation improvement project that aims at bringing together caring and interested private sector organisations and individuals to achieve improvements in the quality of life.

To achieve the objective, the Okyenhene set up a Partnership Brokering Team to stimulate sensitivity, foster partnership across every imaginable boundary and elicit support for the major critical national concern.

A statement in Accra signed by the Board Chairman of the Team, Prof Agyeman Badu Akosa, and copied the Ghana news Agency on Tuesday said the team whose activities and consultations were currently coming to an end was formed for various reasons.

These included declining environmental sanitation status as a result of poor waste management, ignorance, beliefs, preferences or habits at both the personal and community levels, which were some of Ghana's major critical national or community concerns, the statement said.

It said the decline had brought in its wake complex and interconnected social and environmental challenges that could not be salvaged in the short to medium term without cooperation and collaborative efforts by other stakeholders.

According to the statement, the partnership brokering team visited all the telecommunication operators, relevant ministries, notable entrepreneurs and corporate leaders from where it had successfully brokered Multi-Stakeholder Partnership arrangements to complement the government's sanitation improvement efforts.

The statement said though some people had expressed concerns about the delay in implementing the Sanitation Project, the delay could be particularly frustrating for partners who had confirmed resources they intended to contribute towards efforts that would bring the project into reality.

The sources of the delay could be attributed to two main factors: partnership building challenges and the need to capture footages as part of Okyenhene's Behavioural Changing TV Programme christened: SANITATION INDEX OR SANIDEX.

'Members of the team have been confronted with a number of challenges that have affected attempts to build perfect partnerships. The first comes from cynics who are making strenuous efforts to crush the optimism of those who feel the need to get involved resulting in the hold back of a number of potential partners.

'In other instances, potential partners had their own systems to navigate - some took months for an internal decision to be reached, others made inappropriate decisions instantly and then got frustrated with delays from others as well as dealing with the existing protocols of government which takes time', the statement said.

It added that an effective Information, Education and Communication (IEC) campaign to change inappropriate sanitation behaviours was required and therefore the Sanitation Project had taken so many months to document the nature and severity of the sanitation harm and nuisance in various communities in a coordinated and consistent manner so that future sanitation interventions could be more specifically targeted to the sources of the problems.

'It has also captured scenes depicting people's beliefs, attitudes and habits that are not so supportive of health promoting practices. We believe that the TV programme would enable stakeholders to simultaneously visualise and appreciate the declining sanitation status and trends in their communities in a manner that will evoke emotional sentiments and inspire target audience to advocate for change or feel empowered to change their own behaviour.'

The TV programme will be on air in three weeks.
The statement said the key conclusion that emerged from the consultations 'is that building partnerships is time consuming and expressed the hope that when the project was unveiled, Ghanaians would embrace the initiative to make Ghana cleaner, healthier and more beautiful'.