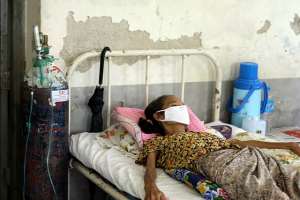 There is no doubt that tuberculosis (TB) and HIV care should be integrated at different levels, particularly in high burden settings. Being part of the UNITAID mission to report from the global launch of the largest-ever roll-out of Gene Xpert MTB/RIF machines in Yangon, Citizen News Service - CNS got an opportunity to witness an inspiring work done in Myanmar since 2005 where TB and HIV care services are getting increasingly integrated at different levels, with support from the International Union Against Tuberculosis and Lung Disease (The Union) and partners.

Dr Sandra Hla Myint, TB Unit Manager, The Union, Myanmar said to CNS: "We at The Union began working on integrated HIV care for TB patients living with HIV (IHC) in 2005. Our concept of integrated care entails offering HIV testing and counselling to individuals with TB who are registered for anti-TB treatment with a national tuberculosis programme (NTP). This service is also offered to their family/household contacts, including children, as appropriate. If they are found to be HIV positive, TB patients and their contacts are offered integrated HIV care, including antiretroviral therapy (ART)." So far, over 12,000 patients have benefited from IHC in Myanmar.

Dr Philippe Clevenbergh, Director of The Union in Myanmar, is credited to be the man who, with his team and partners, made IHC a reality on the ground in Myanmar. The IHC project has helped secure significant political commitment for collaborative TB/HIV activities, offered routine HIV counselling and testing for TB patients, increased TB screening among people living with HIV, provided standardised HIV treatment regimens and regular patient follow-up, improved recording and reporting for TB/HIV indicators, among other positive outcomes.

IPT
Isoniazid Preventive Therapy (IPT) is an important intervention for preventing and reducing active TB in communities affected by HIV - preventing active TB can prevent millions of people from being infected in the community and in health care services. The Union is also providing IPT since 2009 for people living with HIV (PLHIV) who do not have active TB disease, but only latent TB. Dr Sandra said that it is very important to screen PLHIV for TB. PLHIV who present with five symptoms such as cough since two weeks, fever, night sweat, weight loss, and/or lymph node related issues are considered for TB screening. Those who test positive for active TB disease are provided standard TB care. Those who test negative for active TB disease but have latent TB, have never received IPT before or in case of women are not pregnant, are considered for IPT if they qualify other criteria as well. Since 2009, over 1,500 people have received IPT for six to nine months duration. All IPT patients are also provided with Cotrimoxazole Preventive Therapy (CPT) which continues for longer duration.

HIV CLINIC AT MANDALAY GENERAL HOSPITAL
Most of the people living with HIV first came to Mandalay General Hospital at CD4 count much lower than 500, usually between 100-150. There was a separate open area for those with multidrug-resistant TB (MDR-TB) waiting for their ART or other HIV care services. The pharmacy here provided medicines including CPT, ART, among others. Usually these patients coming from a distance are handed three months of ART medication at a time. However those who are initiating ART are given drugs for shorter duration such as a month at a time. Those PLHIV who are admitted in indoor patient facility receive their medicines daily.

PAWTN
The Union is working in collaboration with National TB Programme, National AIDS Programme, Department of Health and the public sector in particular the township health centres. The Union had launched PICTS (Programme to Increase Catchment of TB Suspects) in seven townships of Mandalay since 2012. PICTS is increasing the demand for and access to TB diagnosis, the number of TB cases diagnosed in project area, community knowledge about TB among other positive outcomes. The Union also supports the facilitation of People Affected With TB Network (PAWTN).

A male member of PAWTN said that he earlier worked as a volunteer with Red Cross before getting involved with the PICTS programme. His brother contracted active TB disease and he saw how his brother went through TB from close quarters. When PICTS opportunity came for volunteer training in his township, he went ahead and got himself enrolled. His knowledge about TB increased manifold in the backdrop of his personal experience of his brother going through TB treatment. He believes that knowledge is power and raising awareness about TB in the community will help strengthen TB control and care. He also helps people who may have presumptive TB to get to the right TB centre.

Nay Nwe Win, a female member of PAWTN, said that before joining this network, she was volunteering to support people co-infected with TB and HIV. She was very aware of how to care for HIV related issues and help people living with HIV (PLHIV) take good care of their own selves but knew little about TB related issues. When The Union announced volunteer training in her township she joined it. Now she confidently helps PLHIV co-infected with TB to dispose their sputum, take medicines on time, provide support so that they can complete anti-TB treatment successfully, among other support services.

The leader of this network, a male member of PAWTN, said that he was earlier volunteering with Red Cross, women rights organizations, among others. Now people affected with TB have organized themselves as PAWTN to spread awareness, increase referral of PLHIV to TB care centres as required, find PLHIV with presumptive TB earlier and refer them to the right TB care centre, attend to their psychosocial needs to complement adherence, help in contact tracing or bring those back to TB programme who are not able to adhere to anti-TB treatment, among other roles. He said that they have realized how beneficial it is for the community to be engaged in the responses to TB and HIV and they will continue to do so even beyond the ongoing PICTS project.

STRENGTHENING LABORATORY CAPACITY ON THE GROUND
In 2009, UNITAID's ExpandTB project had helped train staff of referral laboratories where bio-safety level III laboratories are functional since July 2011 in Yangon and Mandalay. The building and maintenance is taken care of by the Myanmar government. 1,700 MDR-TB patients have benefitted from these services since then. In Mandalay, Gene Xpert has been functional since 27 October 2012. Last week UNITAID has further provided 4 Gene Xpert machines to Myanmar for helping accurately diagnose TB and rifampicin drug resistance within two hours.

HIV CLINIC IN YANGON
Dr Sabai Phyu, Physician, Thaketa General Hospital,Yangon, also spoke to CNS. She said that her hospital is 25 bedded and renovated to provide shelter for people living with HIV. Services here included indoor admission, sexually transmitted infections (STIs) treatment, laboratory investigations such as CD4 count, hematology and biochemistry departments, treatment of opportunistic infections (OIs) such as TB, among others. Nutritional support is also provided to patients here. The Union is providing ART here at this hospital. Members of PLHIV networks including sex workers, men who have sex with men (MSM) or injecting drug users (IDUs) are engaged here and provide counselling and other psychosocial support services including helping with Lost to follow up cases.

Despite challenges Dr Sabai and her team continues to do inspiring work. With one CD4 count machine that can process 20 samples daily, there is bound to be a waiting list. When we visited, the waiting list for CD4 test was till end of October 2013. More work needs to be done around strengthening laboratory capacity, ensuring regular uninterrupted supplies of quality-assured standard diagnostic kits and medicines, and training and re-training of skilled team members.

There is enough evidence to promote TB screening of people living with HIV and HIV screening of TB patients. Integrating these two, often vertical, services, not only increase case detection but also retention and adherence rates of people who are receiving care for the dual epidemic of TB and HIV.

In March 2009 at the Third Stop TB Partners' Forum, Dr Michel Sidibe, Executive Director of UNAIDS had said to CNS: "When a virus (HIV) and a bacteria (TB) can work so well together, why cannot we?" His statement holds more wisdom even today. Hope TB and HIV programme managers are listening! (CNS)