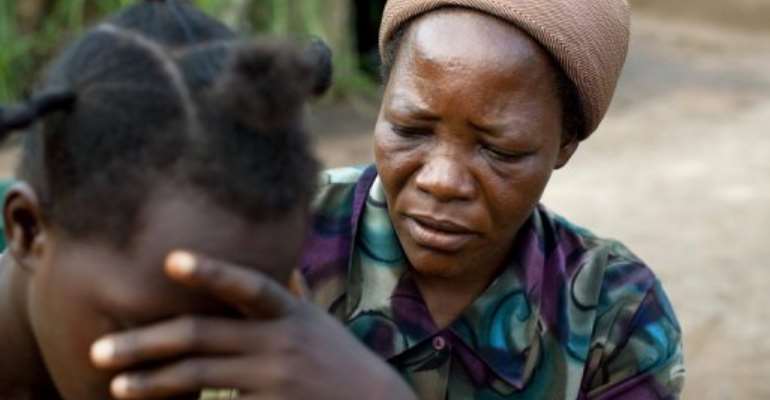 Sister Angelique Namaika listens to a young woman in Dungu, DRC, in a picture release September 17, 2013. By UNHCR (UNHCR/AFP)

GENEVA (AFP) - A Congolese nun who has dedicated herself to helping women who have escaped cruelty at the hands of Ugandan rebels has won the annual Nansen prize awarded by the UNHCR, the refugee agency announced Tuesday.

A member of the Augustinian religious order of Catholics, she has dedicated herself to helping women who escaped extreme cruelty at the hands of Ugandan rebel movement the Lord's Resistance Army (LRA).

She works in a remote northeast region of the Democratic Republic of Congo and through her Centre for Reintegration and Development, "has helped transform the lives of more than 2,000 women and girls who have been forced from their homes and abused, mainly by the LRA," the UN refugee agency said in a statement.

"Her one-on-one approach helps them recover from the trauma and damage. On top of the abuse they have suffered, these vulnerable women and girls are often ostracised by their own families and communities because of their ordeal," it added.

UN High Commissioner for Refugees Antonio Guterres commended the 2013 laureate: "The challenges are massive, which makes her work all the more remarkable -- she doesn't allow anything to stand in her way."

The Lord's Resistance Army has waged a guerrilla campaign in Uganda since 1987.

Since 2008, an estimated 320,000 people have been forced to flee in DR Congo's north-eastern province of Orientale, including Sister Angelique herself.

She was born in the village of Kembisa, in the DR Congo's northeastern Orientale Province, to a farming family of Christians.

She will receive her prize at a ceremony in Geneva on September 30.

Sister Angelique will then travel to Rome where she will meet Pope Francis before taking part in meetings in Paris, Brussels and Oslo.

Instituted in 1954, the Nansen Refugee Award is given annually to an individual or organisation in recognition of dedicated service to refugees and is the most prestigious honour conferred by UN High Commissioner for Refugees.