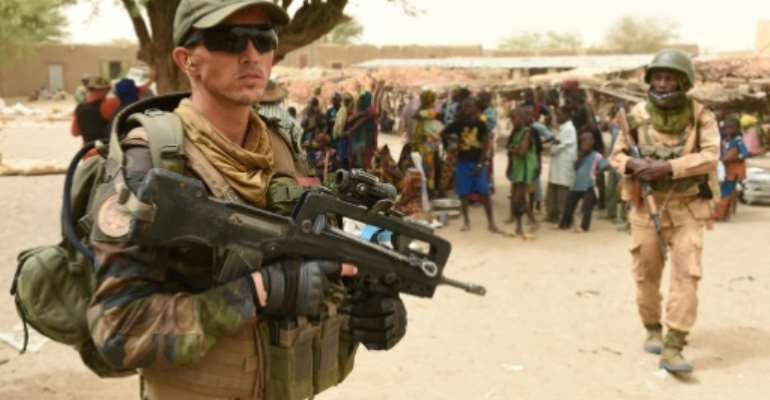 France established a military presence in the Sahel nation in January 2013 to combat Islamists which had overrun key northern cities. By Philippe Desmazes (AFP/File)

Bamako (AFP) - An Al-Qaeda-linked group has released a video showing the purported execution of two Malians accused of collaborating with French counter-terrorism forces in Mali.

France established a military presence in the Sahel nation in January 2013 to combat Islamists including the group behind the video, al-Qaeda in the Maghreb (AQIM), which had overrun key northern cities.

The images released late Friday show the public execution of two men, named as Mohamed Ould Beih and El-Hussein Ould Badi, who were respectively accused of being paid to recruit informants and of showing French troops jihadists' weapon stashes.

Badi was also accused of collaborating with Mauritania to provide it with intelligence about jihadist fighters in Libya.

After the men are shown being shot dead by a firing squad in front of a large group of nomadic tribesmen, a commentary issues the threat of a similar fate to the local population if they are tempted to sell information.

It appears to be a sequel to a December 2015 video named "Traitors" in which two Malians and a Mauritanian were killed for similar reasons, also before an audience.

The men in the latest video are identified as being from Timbuktu in northern Mali, but the site of the killings is not identified.

The video was released the same day that a French soldier deployed in Mali sustained fatal injuries after the vehicle he was travelling in hit a mine close to the northern city of Kidal.

The jihadist group Ansar Dine, which also has ties to Al-Qaeda, claimed that attack on social media.

Jihadists have been driven back from Mali's main cities due to French operations and the presence of a UN mission, but vast swathes of the country remain out of the control of Malian and foreign forces.