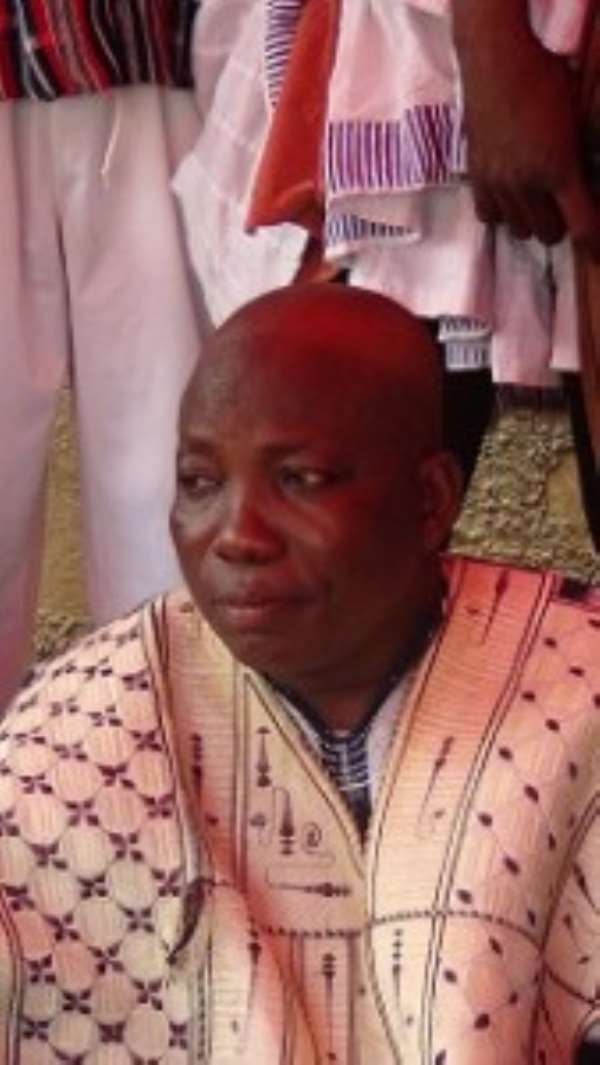 AFTER BEING declared by the Supreme Court as the legitimate Chief of the Buipe Traditional Area, the Paramount Chief of Buipe, Mahama Jinapor II has taken bold steps to settle the protracted chieftaincy dispute that existed between him and his rival chief, Buipewura Bawa Awushie Jewu.

The rivalry between the two Chiefs, which led to bloody clashes, loss of human lives and destruction of valuable properties, especially over the last four years, came to an end at a colourful unity durbar in Buipe, initiated by the Jinapor family.

The Buipe Traditional Area had been in serious turmoil after the Gonja Traditional Council, chaired by Yagbonwura Tuntumba Bore Essah I, unanimously impeached Buipewura Mahama Jinapor II for an alleged gross disrespect and misconduct.

Buipewura Jinapor II was reported to have verbally assaulted the members of the Traditional Council and pulled out his private pistol during an argument in one of the Council meetings at the Yagbonwura's Palace in Damango.

He was, therefore, dis-enskinned by the Yagbonwura's Council after he had purportedly refused to apologize for his alleged misconduct, and his main rival from the Awushie family, Bawa Awushie Jewu who keenly contested him for the Buipe skin was subsequently appointed as the chief of Buipe by the Traditional Council.

This action by the Gonja Traditional Council did not only create parallel authority in Buipe, but also brought serious tension to the area between the supporters of the two chiefs. Members of the Awushie family refused to recognize Buipewura Jinapor II as a chief, and vice versa.

However, the embattled Buipewura Mahama Jinapor sent the matter to the Northern Regional House of Chiefs for redress. But the House failed to adjudicate the matter because of the entrenched position that was taken by the Gonja Traditional Council.

Buipewura Jinapor, who was bent on seeking justice at all cost but not through war, again headed for the Supreme Court for proper hearing.

That notwithstanding, for the three to four years of legal battle, the Buipe town was filled with tension and pockets of violence, especially between the supporters of the two families. The Supreme Court finally ruled in favour of Mahama Jinapor II and caused the Gonja Traditional Council to reinstate him as the legitimate Chief of Buipe.

The Chronicle has learnt that even before the Supreme Court final verdict on the matter, the Yagbonwura and the Gonja Traditional Council had prayed to the Court for an amicable out of Court settlement, which largely formed the basis for the final ruling.

Immediately after his victory, Buipewura Jinapor II, who is also a former security chief, initiated a move to re-unite the people of Buipe. He, therefore, reconciled with his main rival, Bawa Awushie Jewu and enskinned him as the 'Danyampe-wura', which makes him next in command to Buipewura Jinapor. It also qualifies him to be the next Buipewura.

After the enskinment, Buipewura Jinapor II also paid a royal visit to the new Danyampe-wura to further tighten the bond of brotherliness.

As a result, an enthusiastic crowd, predominantly supporters of both Jinapor and the Danyampewura, gathered at the forecourt of the Palace of the Danyampe-wura Bawa Jewu to welcome the Paramount Chief, amidst drumming and dancing by both chiefs and their supporters.

The great history of Buipe and the Gonja Traditional Area in general was successfully accomplished and now peace has finally returned to Buipe, as both chiefs now fraternize together, and with their followers.

Speaking at the colourful durbar in Buipe, the Danyampe-wura, who was filled with so much joy commended Buipewura Jinapor II for proving to be a good leader, who adhered to rule of law and his all inclusiveness.

He assured the Buipewura of his full support and cooperation to ensure everlasting peace and development in Buipe, and thus cautioned his supporters to be tolerant and peaceful in their dealings with the Jinapor followers.

'Whatever happened in the past was just a mistake. No one should see himself or herself as a member of Jinapor or Awushie family, but as people of Buipe with a common destiny. This is the only way we can have development'.

Buipewura Mahama Jinapor II on the other hand assured all the people of his readiness to work with everybody to promote development. He took the opportunity to invite more local and foreign investors to come to Buipe to ensure an accelerated development.

The Assemblyman for Buipe Electoral Area, Hon Abubakari Yussif in an interview with The Chronicle commended the two chiefs for softening their grounds and allowing peace and unity to return to the area.

He was confident that with the level of peace prevailing in Buipe at the moment, development would definitely find its way to the area.

ion to prepare a lease to cover the acquisition and occupation of the land.

Mr. Mensah has confided in The Chronicle that he has personally asked the mayor and the contractor to stop work, until the land has been acquired legally.

He said the KMA does not own any land and since the Lands Commission prepares leases for Part One lands, any such development without legal documentation would not be allowed.

Chairman Mensah said the Lands Commission would not hesitate to go to court to restrain the developers (mayor and contractor) from developing the land illegally.

An Assembly member told The Chronicle that he could not remember the General Assembly ever discussing the relocation of the Children's Park to the land under dispute, neither has the Assembly approved of any such project.

According to the KMA source, the nearest the Social Services Sub Committee of KMA came was a recommendation to the Assembly to find ways of generating revenue from open spaces within the metropolis.