Our Husbands Are Not Ready to Retire: Miners’ Wives Tell Management of AngloGold Ashanti 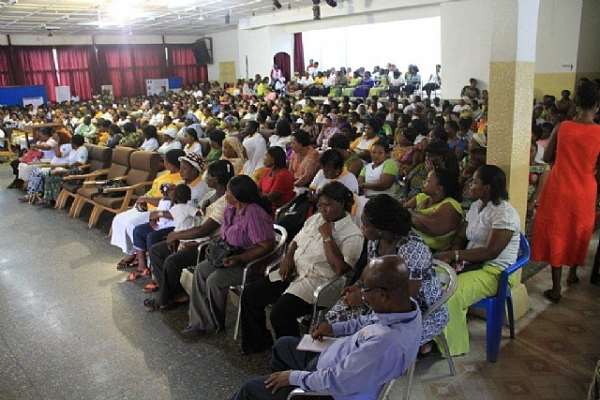 Wives of workers of AngloGold Ashanti Obuasi mine have appealed to management of the company to reconsider its decision to lay off a significant percentage of its workers. The company has been considering a proposal to lay off a significant percentage of its 8,000 - strong workforce due to factors like falling gold price on the international market as well as the ballooning cost of production that has eaten deep into its profit margins. However, the Obuasi Mine Workers' Wives Association, an affiliate of the Ghana Mine Workers' Union has asked the management of the company to reconsider this decision as their husbands are not ready to retire. They also contend that the decision will have adverse effects on the local economy of Obuasi, which is already reeling from the harsh economic conditions in the country at the moment.

Further advancing her reasons why the downsizing is a bad idea, Mrs. Doris Appiah-Kubi, President of the association, proffered that laying off workers who had worked in the company for several years will only force such workers to go into illegal mining, popularly called galamsey. This situation, if it happens will further jeopardise the stability of the mine as well as security of staff. 'Even if this downsizing should be done, it should be done cautiously, with a human face', she noted.

Mrs Doris Appiah Kubi, was addressing a well-attended communication meeting between the association and management of AngloGold Ashanti at Obuasi Sports Club. While commending the management of the company for its impressive social investment programmes for the Obuasi community that have improved the living conditions of many of the residents, she also called for a review of the remuneration package of workers since in her view they do not reflect current economic realities. Improving salary levels will motivate the staff to work harder and improve productivity, she explained. Mrs. Appiah Kubi expressed the support of the association to the current reforms being undertaken by management of the company to turn around the fortunes of the mine.

Earlier in an address the Senior Vice President of AngloGold Ashanti, Mr. Mark Morcombe, appealed to the company's stakeholders to assist it in the transformation of the once prized Obuasi operation, so that it can produce more gold at a significantly lower cost than it is doing currently to generate enough revenue to meet its social and other commitments.

He said 'transforming the mine successfully would not only make the operation a major gold producer but will also position it to generate more revenue to meet commitment to shareholders and other stakeholders, especially the people in the communities and the government as a whole'. Mark Morcombe attributed the poor performance of the mine to a combination of poor underground infrastructure, escalating costs of production and falling price of gold, but was full of hope that with the support of stakeholders the mine could soon be transformed.

The company's transformation strategy, he disclosed, hinges on reversing the decline of gold production while at the same time increasing and sustaining the production of the precious metal, re-fixing its underground infrastructure, constructing infrastructure to enable the operation to access more ore from the Obuasi deeps, improving underground processes and gold recoveries at the huge Sulphide Treatment Plant at Sanso, near Obuasi.

The Senior Vice President of the company urged wives of the hard working miners to build a stronger foundation for the mine to operate soundly and profitably, since their role was key to building a new culture to radically improve the way things are done on the mine.

Demonstrate diligence and honesty in your work – Outgoing KM...
31 minutes ago