What Does NPP Want? A Flagbearer Or A President???

By The Scandal Newspaper, Ghana 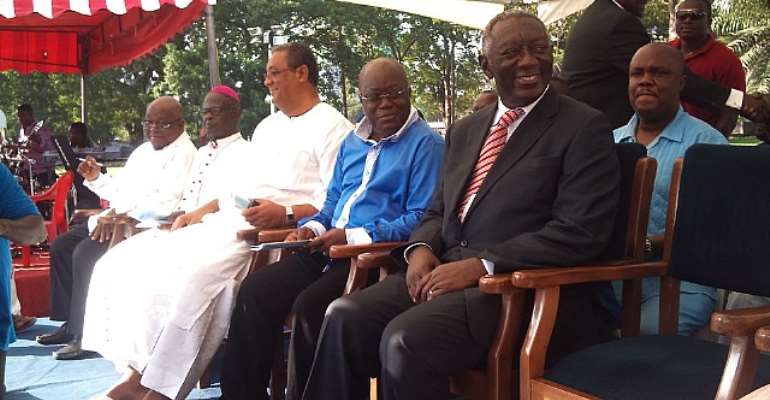 Ghana's electoral process has established some facts since the country turned to the multiparty democracy as the means by which to choose its leaders in 1992. One of these facts is that no political party can win an election outright relying ONLY on the votes of its core supporters.

That is to say, if all the supporters of the NDC or the NPP without abstentions (no apathy, no travels, no sicknesses or any other thing that can prevent one from voting) voted for their Presidential candidates, neither of these two great parties can muster more than fifty per cent of votes to win an election in the country.

This fact has been proven over and over again, with Presidents Rawlings, Kuffuor, Atta Mills and now John Mahama. So then, it will appear that in looking for a candidate to represent a Political Party in a Presidential Election, the consideration should go beyond the candidate's control or popularity in his or her own party, particularly so, if the ultimate desire is to win power and not just present a flagbearer.

As has been established, there is a critical floating voter population of three to five per cent that every Candidate needs to be able to cross the fifty per cent line and win an election. So then like one Presidential Candidate once put it, 'it is not what you want to sell but what the market wants to buy.'

Whilst it is true that candidates have to be popular in their political parties and also need the support of their members as a prerequisite to offer themselves for elections, it makes a lot of sense as well as good management practice for leaders of these parties to test the market especially outside of the party's core supporters in order to make an informed choice of candidate.

Like money, power as they say, has no emotions or sentiments. Power does not know brother, sister, friend or classmate. Power is neutral and will come only if one does the things that will attract it.

Very much unlike the Scandal we have decided to express these opinions today because of the kind of clamour that is going on within the New Patriotic Party (NPP) for the party's 2012 Presidential candidate- Nana Akuffo Addo to stand again as the party's candidate for the 2016 Presidential Elections.

There is no doubt that Nana Addo is a formidable political force not only in his party but also in the political affairs of Ghana. His role in the struggle against dictatorship and the return of democracy, rule of law and respect for human rights in this country, cannot be over emphasized.

To date, he is the only Foreign Minister in Ghana who ever chaired the Security Council of the United Nations at one of the most difficult times of that World Body. But Nana Addo has also had the longest run at Ghana's Executive Presidential Seat without success. He first appeared in 1998 at the NPP's primaries for the flagbearership position but lost to John Agyekum Kuffuor in Sunyani.

In 2007 Nana Addo again mounted a vigorous campaign for the Party's Presidential candidature and this time he won after his closest challenger opted out of a mandatory run-off in Legon-Accra. Since then, Nana Addo Dankwa Akuffo-Addo has been the NPP's Presidential Candidate.

He represented the Party in the 2008 Presidential elections but failed to cross the 50 per cent line for an outright win. In a run-off between him and the late President Mills he again failed to make the mark. Then at Tain in a third round of the same election the NPP again lost it to make Professor Mills Ghana's Third President of the fourth Republic.

In 2010 Nana Addo stood at the NPP Primaries again and won over 80 per cent of the votes of the party's Electoral College to become the Party's Candidate for the 2012 Presidential elections but lost the general elections albeit under very bizarre circumstances to John Mahama. The matter did not end there; for the fifth time Nana Addo contested the results in Ghana Supreme Court where he met with Atuguba's disagreeable verdict.

This is the Presidential journey of this great son of Ghana-Nana Addo Dankwa Akuffo-Addo. Anybody in his shoes will definitely want to take a rest and ponder over his life; find out what the matter is and also decide on what to do next.

It is under these circumstances that we find the clamour for Nana Addo to stand again as NPP's Presidential Candidate as a bit strange. The Scandal would not have commented on this matter if these calls were coming only from party foot soldiers who are no doubt in love with the man.

What surprises us is the fact that some of these calls are coming from the managers and frontline members of the party. The big questions to ask then are; what is the basis for these calls? What are the considerations for choosing a party's leader for an important election? Has any work gone into determining what the 'market' wants at all? Even Nana Addo himself realizes the urgent need to consult (God). Have the party Executives consulted anyone; be it God, the Ghanaian Voters, the 'Market' (and by that we mean forces in the market that make things happen).

In modern day management, no one embarks on a project for mass patronage of this kind without first carrying out some feasibility, bankable or marketable research before taking a decision. How this could have happened in the NPP is still difficult to understand. There have been suggestions that some national executives of the party are afraid of loosing their positions and so they are in a hurry to tie their apron strings to Nana Addo for survival.

Nana Addo is very strong and popular in the NPP. If market research shows that he is ahead of all other possible candidates that the party may present for the Presidential race then off course Nana must be allowed to go irrespective of his age. Even for greater determination it is usually very important to peach the possible candidates against the candidates of the opposing parties to see how they each fare against the opponent. That is how it is done and not just some emotional and sentimental outburst about who has suffered or is most popular in a political party.

What is dangerous is the assumption that because a person is liked in his or her political party then that person should automatically be the one to be selected as Presidential candidate. That way you may end up with a FLAGBEARER and not a PRESIDENT.