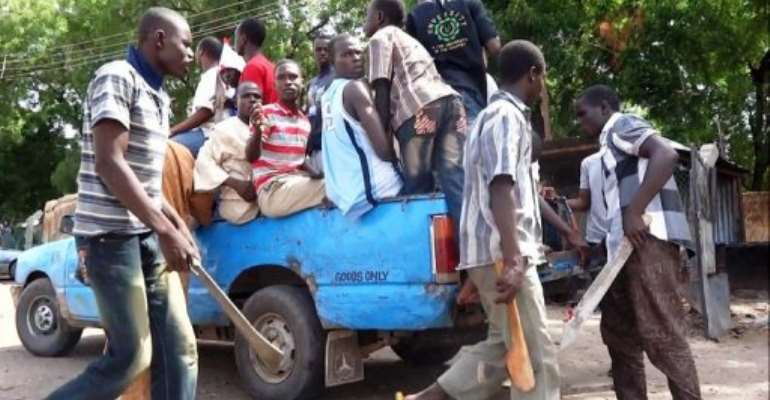 Machete and axe wielding vigilantes on July 19, 2013 in an operation to hunt down Boko Haram Islamists in Maiduguri. By Aminu Abubakar (AFP/File)

KANO, Nigeria (AFP) - Vigilantes in northeastern Nigeria captured 11 suspected members of the Islamist group Boko Haram and handed them over to the army, a military commander said Sunday, adding that four of them have since died in custody.

The vigilantes left their base in Borno state to chase six suspects into the neighbouring state of Adamawa on Saturday, Beyidi Martins, a top commander in the operation against Boko Haram in the area, told AFP.

"The youth vigilantes mobilised from Maiduguri to Michika in pursuit of six Boko Haram terrorists who fled from Bama and succeeded in arresting them along with five other terrorists hosting them," Martins said.

He said four of the suspects had died since being handed over to the army of injuries sustained during their arrest.

The army has applauded the emergence in recent months of civilian fighters, describing them as a helpful tool which has boosted the military effort against Boko Haram.

The machete and axe-carrying vigilantes have succeeded in pushing Boko Haram insurgents out of the city of Maiduguri to villages near Nigeria's borders with Cameroon, Chad and Niger.

However the Islamists, who claim they are fighting to create an Islamic state in northern Nigeria, have repeatedly targeted the vigilantes, with dozens killed in a series of clashes across the northeast.

Violence linked to the insurgency has left more than 3,600 dead since 2009, including killings by the security forces, who have been accused of major abuses.