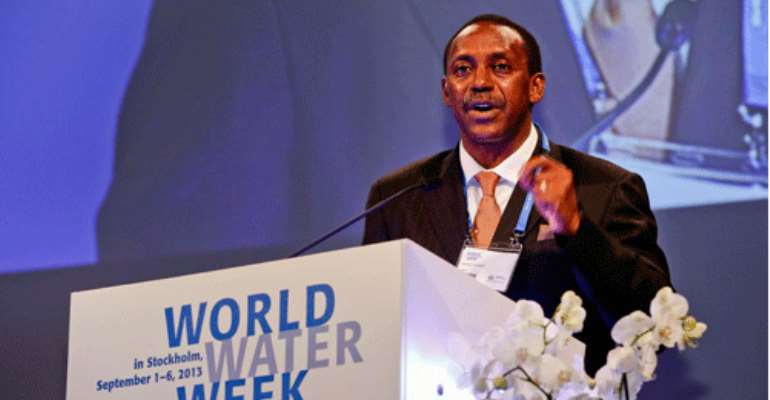 The 2013 World Water Week, focusing on cooperation and partnerships, has been climaxed with a call for the United Nations to put special emphasis on water when it considers the post-2015 global development agenda.

As input to the United Nations General Assembly later this month, the Stockholm International Water Institute (SIWI) presented the Stockholm Statement during the closing ceremony of the World Water Week in Stockholm. The Statement, a result of an open and inclusive consultation process before and during the Week, calls for a dedicated goal on water as the world body considers the post-2015 global development agenda.

Mr Torgny Holmgren, Executive Director of SIWI, said of the Stockholm Statement: 'A great collaborative effort before and during the World Water Week has resulted in a forward-looking document on the role we believe water must have in shaping the future development agenda for our globe. It is an expression of the high level of expertise and dedication I see all around me in the water community'.

The Stockholm Statement states that water, given its centrality to individuals, ecosystems and economic development, sits at the very core of sustainable global development. Therefore, 'a dedicated goal on water is necessary for a world where all people can live in safety and dignity'. By the year 2030 the world must have achieved a doubling of global water productivity, a realization of the human right to safe drinking water and sanitation, and increased resilience to water-related disasters.

In over 100 seminars, workshops and events spread throughout the week, over 2,600 participants have been meeting, discussing and debating the most pressing water challenges of our time under the thematic umbrella 'Water Cooperation - Building Partnerships'.

'This Week has brought together an unprecedented number of professionals here in Stockholm. We have listened to world leaders, government representatives, scientists, members of the private sector and civil society. Every single one of them contributes to the work toward a water wise world.

During the Week, the prestigious Stockholm Water Prize was awarded to Dr Peter Morgan of Zimbabwe for his work to protect the health and lives of millions of people through improved sanitation and water technologies. The Stockholm Industry Water Award was awarded to Netafim, pioneer and leading provider of drip and micro-irrigation technology worldwide, for helping farmers across the world to 'grow more with less'.

The Stockholm Junior Water Prize was given to students Naomi Estay and Omayra Toro from Chile for their work on how living organisms can help clean oil spills in extremely low temperatures.

With the close of the 2013 World Water Week, the sights are already set on 2014. Next year's theme is 'Water and Energy - Making the Link'. Speaking during the closing session, Dr Kandeh Yumkella, Special Representative of the Secretary General of the United Nations and CEO of the Sustainable Energy for All Initiative set the tone for next year's deliberations by telling delegates that energy is inseparable from sustainable development.