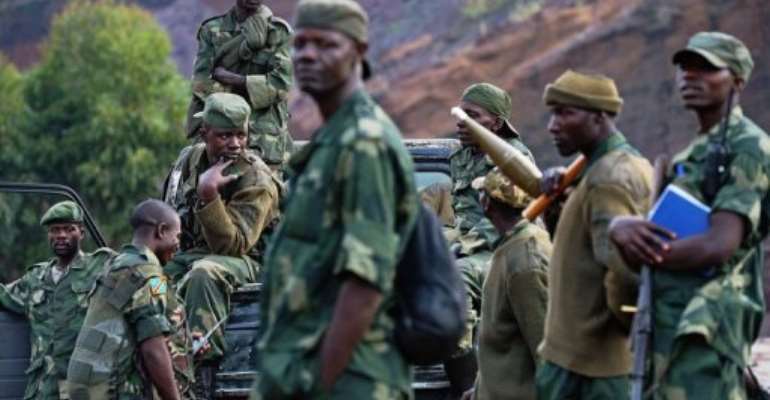 KINSHASA (AFP) - The army in the Democratic Republic of Congo accused Rwandan forces of crossing the border Sunday to kidnap one of its officers in the troubled eastern city of Goma.

The sergeant "was returning from a visit to his family when three Rwandan police pounced on him as he was walking in the neutral zone and dragged him to the Rwandan side," a spokesman said.

"It's a kidnapping... He was in the neutral zone, not in Rwanda," said Olivier Hamuli, spokesman for the Congolese army in the North-Kivu province, of which Goma is the capital.

The alleged incident, on which the Rwandan authorities did not immediately comment, comes amid continuing tension between Kigali and Kinshasa over a rebellion in and around Goma.

Kinshasa and the United Nations accuse Rwanda of being actively involved in the rebellion by the M23, a group of former rebels who were integrated in the army in 2009 but mutinied again last year.

Rwanda in turn has accused the Congolese army of firing rockets and mortar shells on its territory and has massed troops at the border, sparking fears of a further regionalisation of the conflict.

"It was the population that alerted the authorities" to Sunday's kidnapping, the army spokesman said. "Tensions are running high among residents, who see this as a provocation, and we are trying to calm things down."

Hamuli explained that the neutral zone was a street of five to seven metres in width (around 20 feet) separating Goma from Gisenyi, its twin city on the Rwandan side of the border.

He said the Joint Verification Mechanism, a multinational team of military officers set up by the Great Lakes regional body last year in a bid to defuse the M23 crisis, would look into the incident.