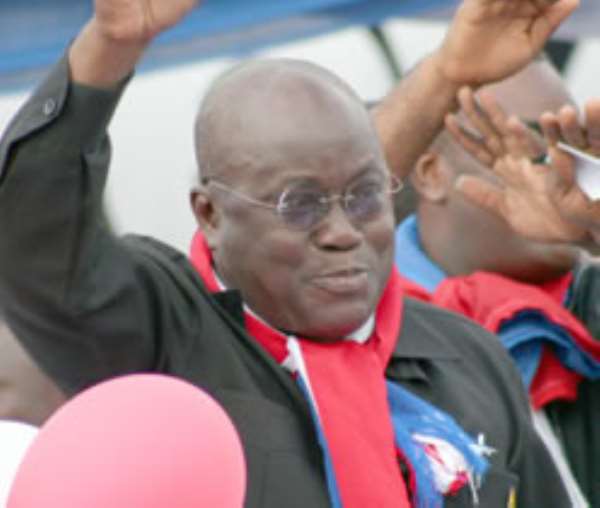 The 2012 Presidential Candidate of the New Patriotic Party, Nana Addo Dankwa Akufo-Addo, says unity within the ranks of the party will be a major prerequisite for victory in the 2016 general elections.

He says with the 2012 elections now over, it is time the party focused on the 2016 elections, kicking off first with internal elections.

He said the party has a rich history of adhering to internal democratic processes and never has the party been known to subject itself to the dictate of only one person, saying that critics who claim he Nana Addo, was being foisted on the party are persons who do not wish the party well.

He was addressing the Greater Accra branch of the party at the Main Hall of the Ebenezer Presbyterian Church, Osu, on Sunday, which address was said to be his last major speech ahead of his break to rest a while before announcing what he plans to do with his political future.

“In our party, we have never had a party where one man speaks and the rest follow, that has never been the NPP tradition, it has never been the NPP tradition, we discuss things and once after the discussion where the majority go that what all of us follow. That spirit of respecting the views of the minority but acting on the wishes of the majority, let us remember it. We are about to go on the cycle of internal elections. This party from the beginning up to today has always elected its leaders.

Nana Addo said since the NPP's formation in 1992, it has elected three leaders – Prof. Albert Adu Boahene; former President J.A. Kufuor and himself, Nana Akufo-Addo - all by democratic means and therefore whoever is elected to lead the party for 2016 will be elected democratically.
“So those going around, those who do not wish this party well, the detractors and the critics of our party, who talk about foistering leaders on their party, they're talking about another party, they're not talking about the NPP.”

He said as the party embarks on internal elections, it should be a healthy, brotherly, fraternal, sisterly contest that exudes solidarity and urged party followers to mind their choice of language, how they approach each other as well as what they say of each other, counselling also that the only hard contest the party has is with the ruling National Democratic Congress.

“So I am pleading, we have not to tear ourselves apart because of the internal elections that we are about to go through. Let's remember that at all times we are brothers and sisters in a common cause. Nobody has the message that we have today in Ghanaian politics. Our message is not 'Ede be keke…. That is not our message…”

Nana Akufo-Addo said the NPP desired power to restore and improve the National Health Insurance system to give quality affordable healthcare, to ensure that the youth are equipped to fight the battles of the 21st Century – the battles of technology and economic development and providing every Ghanaian child the opportunity to have free secondary education; and to transform the national economy – from agricultural raw material economy to an industrial economy producing goods and services to the rest of the world.

He said the party must position itself in a manner that allows it through unity and effective organisation, win the 2016 elections.

Nana Addo reiterated his desire to take time off to rest and reflect and commune with the Almighty, to return later with a decision on his political life, saying he was sure God will pave the way for him.

“One thing that I should make very clear – the well fare and the progress of the NPP is the most important thing in my heart and I know that the Almighty will point the way for me, and when I come back, you will hear from me.”

And while he is away, he wants “that brilliant young man who was my running mate in 2012” with many names now – including “Dr. Pink Sheet” and “You and I were not there”, Dr. Mahamudu Bawumia to accompany party chairman Jake Obetsebi Lamptey to continue with a nationwide thank you tour.