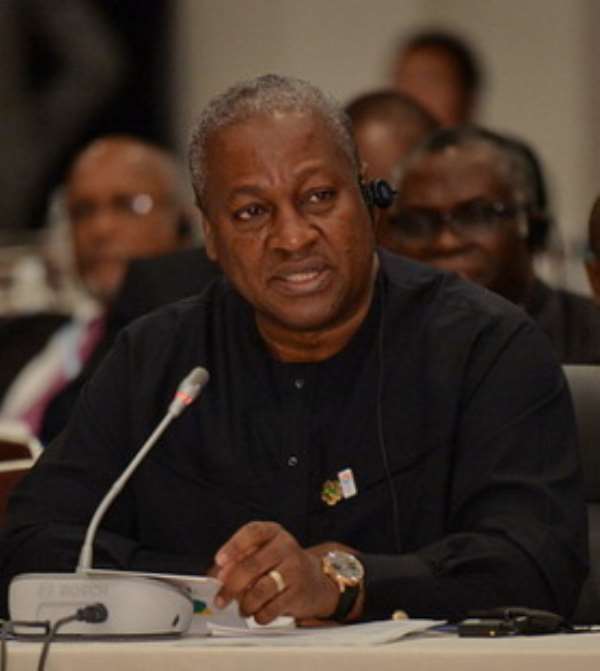 President John Dramani Mahama has criticised the media for providing the platform for people to insult and vilify the head of state, justices of the Supreme Court, chiefs and other prominent Ghanaians.


He said the attacks on the prominent citizens were based on fabrication and outright lies devoid of substance.

For instance, he said, the criticism of the justices of the Supreme Court who sat on the election petition in the media was unguarded since the justices only performed their constitutional duty of adjudicating the case.

He mentioned a recent online publication which alleged that the Asantehene, Otumfuo Osei Tutu II, had facilitated an alleged bribery of some justices of the Supreme Court to rule in his (President's Mahama) favour in the election petition, and the subsequent review of that story on a Kumasi-based radio station as an example of irresponsible journalism.

President Mahama expressed the concern Sunday at a thanksgiving service in is honour at the Cedar Mountain Chapel of the Assemblies of God Church at East Legon in Accra.

Songs of praise, prayers and Bible readings characterised the thanksgiving service attended by hundreds of members of the church, the First Lady, Mrs Lordina Mahama, children of the President, and the Chief of Staff, Mr Prosper Douglas Bani.

President on the Media
The President said Ghana's constitution guaranteed freedom of speech and expression, and indicated that the media were supposed to support the forward match of the country by educating, informing and entertaining Ghanaians.

Besides, he said, the media were supposed to offer constructive criticism for those in authority to be on guard and correct their mistakes.

However, President Mahama said, what the country's media did now was to insult the President and other prominent citizens instead of criticising their acts of commission or omission constructively.

''The media are supposed to advance society, but not supposed to harm society, divide society or move society backward,'' he stressed.

President Mahama said he was not against criticism but it was unfair for people to call him and other prominent Ghanaians names instead of offering constructive criticism of their actions.

For instance, he said, even if a child committed an offence, the child's father was not supposed to insult the child but rather pin point the mistakes and lead the child to do the right thing next time.

''If the criticism is done politely and civilly, it makes it easy to take,'' he said.

"Our justices have a difficult assignment. So if they have taken a decision, must we vilify them? The discussions are not necessary. They are not going to take the nation forward," he said.

President Mahama said the election petition had enhanced Ghana's image as a beacon of democracy and peace, since the election dispute could have led to war in other countries.

Therefore, he said, it was crucial for Ghanaians to put the case behind them and forge ahead to build the country.

Economic Growth
The President said God had blessed the country with natural resources and human potential while the nation was also making progress economically.

For instance, he said, Ghana's economy had recorded positive growth since 1985, with the country recording average growth of eight per cent per annum within the last few years.

He said the average eight per cent annual growth of the economy could catapult Ghana into a full middle-income status in a few years.

President Mahama stressed the need for Ghanaians to be grateful to God for bringing the country thus far in terms of infrastructure development, education and living condition.

He said the future prospects for Ghana were bright, and therefore, asked all Ghanaians to work together to move the development agenda forward.

Rev Dr Wengam said it was God who anointed President Mahama to lead the country, and expressed the hope that the President would work with his team to grow the economy.

He prayed for God's continuous blessing on the country, President Mahama, his team and family, and declared that the President would enjoy God's throughout his term in office.