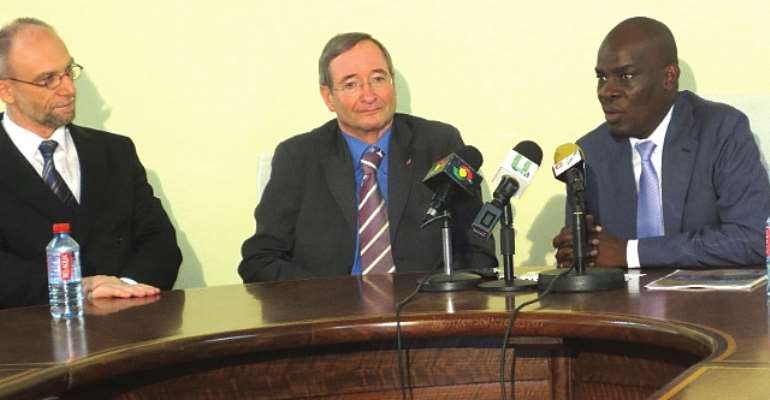 Ghana and its Austrian counterparts are to renegotiate the Bilateral Investment Treaty (BIT) between the two countries.

The move is intended to prevent the hitches associated with investments by nationals and companies of any of the two countries.

The Minister of Trade and Industry, Mr Haruna Iddrisu, said this when he briefed the Daily Graphic after hosting a delegation from the Austrian Federal Economic Chamber, led by its President, Dr Christoph Leitl, at the ministry in Accra on Thursday.

It is not clear what the present BIT between Ghana and Austria entails but the Trade and Industry minister is optimistic that when reviewed, it would benefit the two countries.

About BIT
A Bilateral Investment Treaty (BIT) is an agreement establishing the terms and conditions for private investment by nationals and companies of one state in another state.

This type of investment is called foreign direct investment (FDI). BITs are established through trade pacts.

A 19th Century forerunner of the BIT is the friendship, commerce, and navigation treaty (FCN).

Most BITs grant investments made by an investor of one contracting state in the territory of the other a number of guarantees, which typically include fair and equitable treatment, protection from expropriation, free transfer of means and full protection and security.

The distinctive feature of many BITs is that they allow for an alternative dispute resolution mechanism, where an investor whose rights under the BIT have been violated could have recourse to international arbitration, often under the auspices of the International Centre for the Settlement of Investment Disputes, (ICSID) rather than suing the host nation in its own courts.

Renewable Energy
Mr Iddrisu said the delegation expressed interest in investments in renewable energy because of the expertise of that country.

'We are glad to hear this because in our quest to increase the power generation capacity in the country, we are looking at how to attract investments in renewable energy', he said.

Ghana's Renewable Energy Act, passed in 2011, is the country's response to a global movement away from traditional sources of power like coal and thermal plants to the use of the sun, wind and biofuels for power generation.

So far, Ghana has installed only two megawatts of solar power at Navrongo in the Upper East Region, but a few individuals and organisations have installed solar panels to complement their power needs.

Although the Renewable Energy Act does not specify how much each of the three main renewable sources will contribute to the 10 per cent target, solar is seen as the most plausible even though it is relatively expensive in the initial stages.

Mr Iddrisu said Ghana looked up to the Exim Bank of Austria to consider investing in the sector where its strength mostly lay.

Hospitals
The Trade and Industry minister commended the Austrian government for the role they were playing in the construction of some district hospitals in the country.

'It is our request to them to construct four in the Western Region and another four in the Brong Ahafo Region,' he said