Is The Asantehene Jinxed Or He Does It On Purpose? 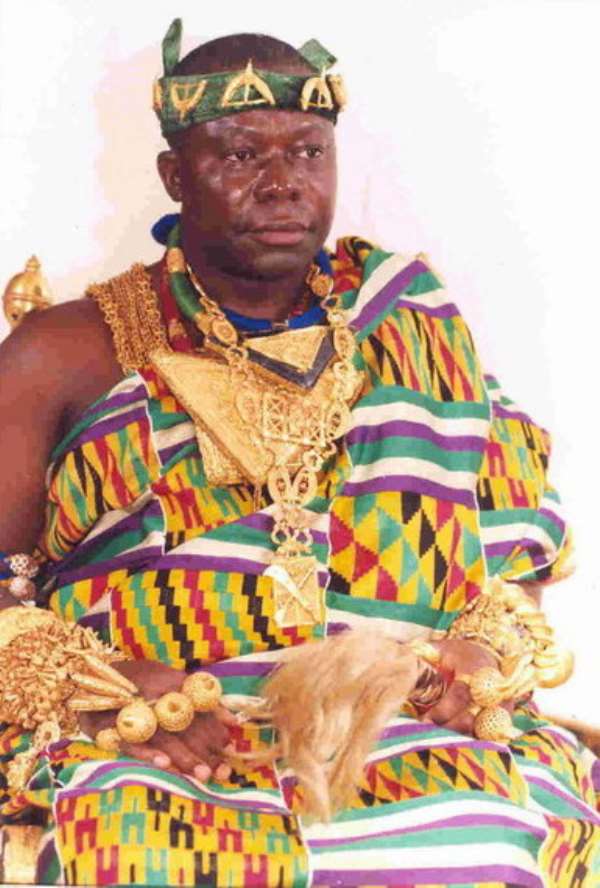 I am really worried about the implications of the never-ending but persistent nose-diving credibility of the sitting Asantehene, Otumfuo Osei Tutu Ababio II. For quite sometime, he has been on the news for all demeaning reasons not befitting an Overlord of the once most powerful and most respected Asante Kingdom.

I wonder why he cannot for the sake of the Asantes that he rules, who in their majority disagrees with some of the allegations levelled against him were they true, refrain from such unpalatable behaviours?

Not too many years ago, the same Alhaji Morro, now his best friend, nearly got him into trouble. This was during the administration of former President Kufuor. This issue had to do with some cocaine where the accused contacted Alhaji Morro to take him to see Asantehene when the security net was closing in upon the accused.

For what reason, nobody knew. Since that time, he has erroneously or otherwise been teasingly accused of dealing in cocaine hence, some calling him the Cocaine Chief. How our once adorable contemporary King Solomon has been denigrated by his own subjects is beyond imagination.

"He who lies down with dogs, rises with fleas". As long as the Asantehene continues to associate with dubious characters, he will forever leap from one trouble into another. As if that was not enough, he had some traditional antiques (jewels etc.) belonging to the Asantehene palace and Asanteman dating several hundreds of years mysteriously stolen in Norway. Many were Ghanaians and Asantes that initially disbelieved his version of defence put up in the wake of the alleged theft. Why were people doubting him, he should sit back, ponder over it and advise himself accordingly.

Furthermore, I see him to have botched up the arbitration of the Kumawu Chieftaincy dispute dating as far back as year 2007. Either he does not know the history of Kumawu, or he intentionally chose to act ignorance for a reason or the other. After six years of tactical delays, he finally, sitting in Council of Asanteman, declared that there was no victor or vanquish between the two litigants. He therefore, declared both families (Ankaase and Ananingya) as belonging in the same Tweneboa Kodua royal family. This is a complete miscarriage of justice after all the six-year long but fruitless wait.

To set the record straight, the Ankasses had never been, are not, and shall never be, the descendants of Tweneboa Kodua. Asantehene had better learn his history properly to cease making a mockery of himself and the Asante Kingdom. He should call a spade a spade. The Ankaases are NOT the descendants of Barima Tweneboa Kodua so he had better retract his flawed judgment period!

Now, rumours are strongly rife that he engaged in underhand dealings to scupper the Supreme Court verdict that from all intents and purposes, according as viewed live on airwaves, should have favoured the petitioners. Instead of coming out to rebut the allegation as strongly and creditably as he could, he has rather relegated himself to the backseat while allowing same Alhaji Morro to be in control of affairs (of his defence).

Does he think the mobilisation of the Kumasi Zongo Community to inflict lawlessness on Kessben FM will rectify the stain on his integrity as far as the allegation stands? Does he not realise that he is worsening his plight or stand in the eyes of the Ghanaian public if he stood back for the Zongo boys to execute their heinous threats on the radio station? Who at all is authorising them to do that? Their ability to destroy the radio station will never exonerate Asantehene of the blame if indeed, he did as being rumoured.

Why is it always Asantehene that is on the news for all bad reasons but not other Ghanaian chiefs? Why can't he surround himself with responsible persons or chiefs that can offer him good advice? Why is he seemed to be surrounded by probable crooks who rather always seek his downfall?

I advise Otumfuo Osei Tutu Ababio II to aspire to live above reproach. His current record is nothing to write home about. It is a complete disaster, eyesore and nauseating.

I would not have dabbled in if it was not to assist in redeeming him from the claws of the wicked-intended persons surrounding him. They seek his downfall but he has not noticed it. Who are those that advise Asantehene? I just want to know!

All said and done, we should not condone evil but to come out to condemn all acts of falsehoods directed at Asantehene with all the aggressions towards Kessben FM and New Free Press. Asantehene had better take the radio station to Court if he believes in the Courts rather than seeking to exact justice his own way, hiding behind the Kumasi Zongo Community as presumed by many a Ghanaian. I personally do not trust the Courts to deliver true justice concluding from Justice Atuguba's verdict on Election 2012 petition. That is my opinion and I am entitled to it.

Let us wait and see how Asantehene will react following from this publication. Will he turn a new leaf for the better or he will continue to stagnate in waywardness?

Finally, all Ghanaians should muse on what Emperor Haile Selassie of Ethiopia once said, "Throughout history, it has been the inaction of those who could have acted; the indifference of those who should have known better; the silence of the voice of justice when it mattered most; that has made it possible for evil to triumph."

Are we going to sit down while some invisible forces push the Kumasi Zongo Community under the auspices of the said Alhaji Morro to inflict lawless punishment on the media?