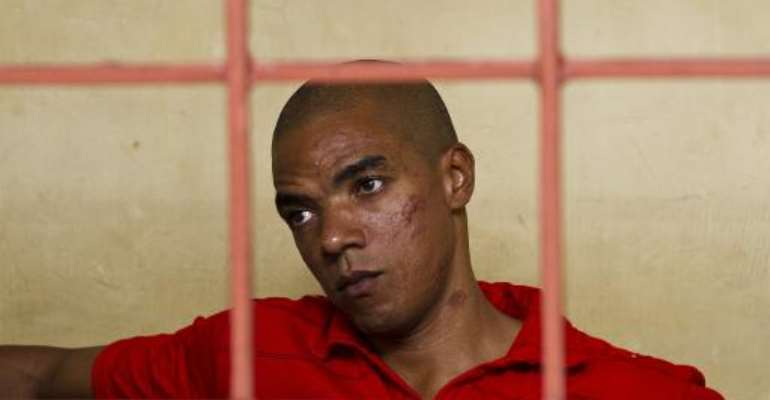 Materials recovered from the home of British terrorism suspect Jermaine Grant, pictured here in Mombasa on February 17, 2014, were capable of making explosives according to a Kenyan bomb disposal expert. By Ivan Lieman (AFP/File)

Mombasa (Kenya) (AFP) - Materials recovered from the home of a British terrorism suspect in Kenya were capable of making explosives, a court in Mombasa heard Friday.

A Kenyan bomb disposal expert, giving evidence at the trial of alleged Islamist militant Jermaine Grant, said detectives found a long list of dangerous chemicals as well as electrical components, including a type of switch commonly used by suicide bombers.

"Upon mixing one or more of the chemicals, if the chemicals were detonated, high explosions would be experienced," Sergeant Mwachuphi Salim told the court.

Grant, accused of ties to Somalia's Al-Qaeda-linked Shebab, was arrested in Mombasa in December 2011 on charges of plotting bomb attacks.

He denies the charges. The next hearing in the case is due to take place on April 30, when the prosecution's last witness will testify before the court.

Last month, a British counter-terrorism officer testified that Jihadist documents and other materials "clearly dedicated to the making of explosives and weaponry" were also found on a flash storage drive allegedly in Grant's possession.

Prosecutors have accused Grant, a Muslim convert, of working with fellow Briton Samantha Lewthwaite -- the fugitive widow of British suicide bomber Germaine Lindsay, who blew himself up on a London Underground train on July 7, 2005, killing 26 people.

Lewthwaite, a mother-of-three and daughter of a British soldier, is wanted by Kenyan police.

Grant is believed to have become radicalised as a teenager in the same British prison where "shoe bomber" Richard Reid first turned to Islam.

Reid, who claimed he was an Al-Qaeda recruit, is serving a life sentence in the United States for trying to blow up a flight from Paris to Miami in December 2001.

In December 2011, Grant pleaded guilty to charges of being in the country illegally and lying about his nationality, for which he was sentenced to two jail terms of two years, to run concurrently.

However, he was acquitted of robbery charges in a separate trial in Nairobi last year.