Kufuor, others call for stronger institutions, quality leadership in Africa 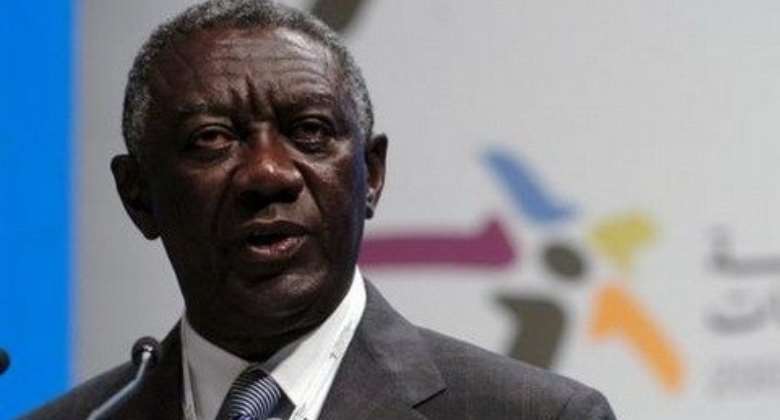 Former President John Agyekum Kufuor and other eminent persons have underscored the need for African countries to use stronger institutions and quality leadership to develop the continent and improve the life of its people at a lecture in Accra on Thursday September 12.

Speaking at the John A. Kufuor Foundation's 3rd Global Development Lecture on “Africa – Emerging Economies & Globalisation” , President Kufuor said good leadership is a critical prerequisite for good governance, which in turn delivers the required environment for development. He said leadership therefore should be nurtured, and called on students to use the opportunity of schooling to interact and expand their mental horizons so that when they come out of school, they can help proffer solutions.

“We all know our continent is afflicted. Diseases, ignorance, poverty, dictatorships and so on, we need to tackle all these things and nobody is going to come from outside to do these works for us, we must do them to make our name into the developed world.”

President Kufuor said when Africa has related to other continents, it has done so from a position of disadvantage, her rich mineral resources exploited and carted away, while the continent suffer the indignation and scorn of the exploiters.

Pragmatism rather than posturing is what is needed, he re-echoed words attributed to Dr. Trevor Manuel, South Africa's National Planning Commission Minister, saying it is a critical maxim that must be inculcated in the African for the work ahead.

Former President Kufuor who said the foundation aims to promote and advance leadership, good governance and development on the African continent, also pointed out that real and rounded development with high quality of life for all the people on sustained basis is the dream of all nations.

Dr. Trevor Manuel
Dr. Trevor Manuel pointed the way for Africa's economic emancipation, pinpointing the need for a collective assault on the impediments to development on a continent paradoxically wanting amidst plenty.

In African unity lies our collective strength, he said, arguing that with so many factors going for the continent, quality leadership and indigenous solutions are some of the critical ingredients required to buck the trend of underdevelopment and misery.

Capping a brilliant address laced with very practical yet highly motivating action points at the lecture at the Accra International Conference Centre, Dr. Manuel said with high growth, the experience of what works and what does not, plus the good luck of excellent commodity prices, Africa critically need leadership and a push for faster and further institutional reforms.

“Let us accelerate the pace of our work, and ensure that every African renews their self-belief. We have the development lessons to build on, we have a rich African history of successes and unrequited promises to draw from. Increasingly, we have to think of a single Africa, and flatten the sovereign impediments to that single objective. It is worth reminding ourselves of our collective capability.

“This is our moment and the questions before us are whether we understand the moment that we have created? Whether we can persuade the dissenters? And whether we can, as Kwame Nkrumah argued, it is clear that we must find an African solution to our problems, and this can only be found in African unity,” he posited, drawing a long drawn cheer from the filled auditorium that included several of Ghana's ex-ministers who served in President Kufuor's administration, as well as a good number of industry chieftains.

Enumerating what he described as an important period in Africa's political economic history, Dr. Manuel said the continent's economic performance over the past decade has been stellar, reaching levels of growth not seen as consistently before. That solid performance, he said, was against the backdrop of a world economy that now in its sixth year of crisis, with no end in sight.

“In fact, the cross-border impacts of decisions in large economies globally have created a huge concern. In particular, the impact of monetary easing by the US Federal Reserve has induced huge volatility in the emerging market economies, especially amongst the BRICS. This admission is included in the Declaration of the meeting of G20 Heads of State who met in St Petersburg just a few days ago. What is important, therefore, is that we raise the quality of both the interactions and commitments by African leaders for mutual and intra-African collaboration.”

Dr Manuel said the past decade offers an important learning opportunity, for during this decade-long boom for Africa, poverty rates fell, school enrolment increased, infrastructure investment spending quadrupled, exports increased and Africa received a growing share of foreign direct investment. And these positive trends come on the back of improving governance and a much sounder approach to macroeconomic management.

Africa, he said, can pat itself on the back, but at the same time, it needs to understand the contextual realities that gave rise to this growth.

“The main question is whether we can sustain these trends, deepen them, broaden them and most importantly, take more of our people along a path of rising incomes, rising employment and better living standards. Despite the positive trends, it is not self-evident that Africa will prosper. Whether we succeed as a continent will depend on the reforms we introduce to sustain growth and make it more inclusive. What we do next, may significantly alter the historical trajectory of our continent. We have to build on the growth of the past decade, and invest in industrialisation and our human capital to further expand and modernise our economies.”

He said there is need to further unlock Africa's growth potential and establish clearer, more effective links between decision-making and implementation and delivery.

Dwelling on a set of themes around which he said reforms must evolve, he said a renewed focus on regional integration; the institutional underpinnings for sustainable growth, including education, health care and the building and strengthening of accountable institutions of governance; a focus on the need for urban policy; and the need for significantly higher investment in infrastructure, and lastly, a set of issues relating to employment, economic diversification, including the need to industrialise are key.

Ken Ashigbey
The Managing Director of the Graphic Communications Group Limited, (GCGL), Mr. Kenneth Ashigbey, pointed out that technology as a force lies at the heart of economic growth in today's global world. He therefore urged economists to developed requisite technical capacities to allow them to utilize resources efficiently.

Touching on the need for peace to motivate investments and drive development, he said its relevance cannot be over emphasised, saying that the recent election petition and its subsequent adjudication have added to Ghana's credentials as a peace-loving nation, even if it stretched the national character and endurance.

While we passed that litmus test, he said there is need to make progress.

He expressed appreciation to the JAK Foundation for finding in the Graphic Group a worthy partner for the event, saying that the group would continue to support his activities and those of any former president.

The event was organised by Creative Trends and chaired by the Managing Director of Tropical Cable Ltd, Dr Tony Oteng-Gyasi.