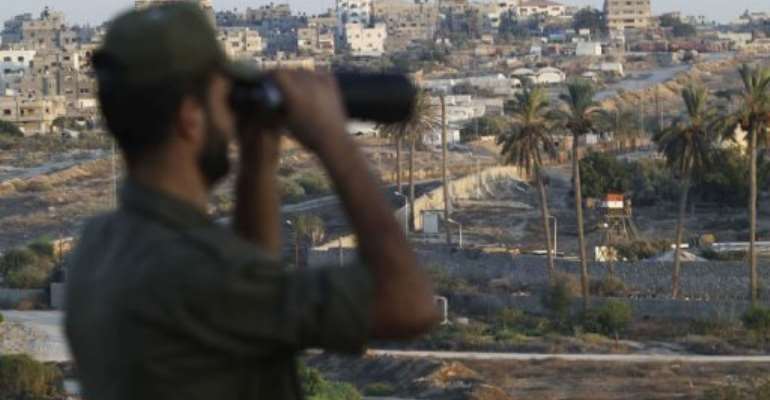 A Palestinian Hamas security guard on duty at the border between Egypt and Gaza Strip, in Rafah on September 11, 2013. By Said Khatib (AFP/FIle)

GAZA CITY (AFP) - Two Egyptian army tanks crossed an initial border fence leading to Gaza for the first time on Thursday, witnesses said, but did not enter the Palestinian territory itself.

Gaza's Hamas rulers neither confirmed nor denied the incursion, but said no Egyptian tanks had entered the besieged Strip.

The tanks "crossed the first Egyptian border fence along the corridor between Egypt and (Gaza), and drove along the road running next to the cement wall" that Egypt built, the witnesses told AFP.

They said it was the "first time Egyptian tanks have been in this area, although they didn't cross into the Palestinian side," adding that soldiers on top of the tanks had masked faces.

A spokesman for Gaza's Hamas government, Ihab al-Ghassin, told AFP that no Egyptian tanks had crossed onto the Israeli-blockaded territory.

The Rafah border crossing -- the only gateway into the Palestinian enclave that bypasses Israel -- was shut and all roads in and out of the town closed as armed forces combed the area for suspects.

Egypt's military has poured troops and armour into Sinai to quell Islamist militant activity which surged after the army overthrew Islamist president Mohamed Morsi on July 3.

It has also put pressure on the Hamas allies of Morsi's Muslim Brotherhood by destroying many of the tunnels used to bring crucial supplies into Gaza.

Demonstrate diligence and honesty in your work – Outgoing KM...
41 minutes ago