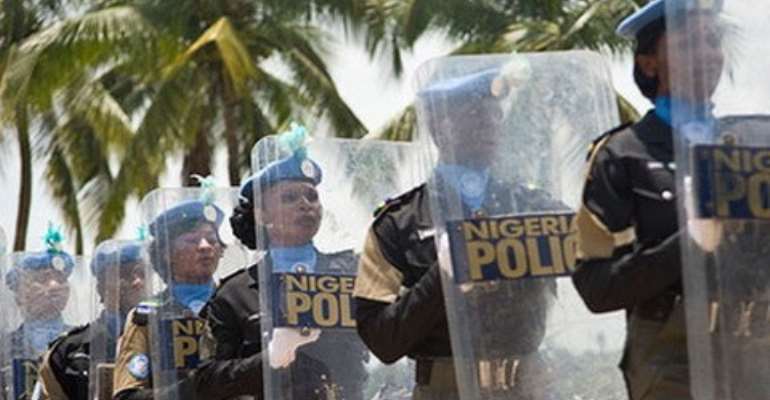 A police source said that both women were “shocked” at their dismissal. ”The dismissal came as a surprise to them,” the source added.

Efforts to get an official confirmation from the Lagos State Police Command were not successful.

Ngozi Braide, the Police Spokesperson, said “she will get back” when reached on the phone by PREMIUM TIMES.

She never did.
The dismissal of the duo brings to three the number of police officers who have been dismissed, in one month, after they were secretly filmed demanding for bribes.

SWIFT DISMISSALS
Last month, Chris Omeleze, a Police Sergeant, was dismissed after a video uploaded on You Tube showed him extorting N25,000 from a motorist.

The footage, which received over 120,000 views, emerged on a Tuesday and within 24 hours, the police officer had received the marching orders.

Mr. Omeleze had spent 21 years in the police force. Wednesday's dismissal brought to an abrupt end the nine year stint of Messrs Itolor and Azingbe as police officers.

“You can see that we are IT compliant, we know what is happening all over the world,” Mohammed Abubakar, the Inspector General of Police, had said last month, in the wake of Mr. Omeleze's dismissal.

“And because we believe that we have to do what is right, we warn our officers and men, sometimes we set them up to ensure that we get them on the act. And so who is caught on the act is being dismissed,” Mr. Abubakar had added.

Ms. Azingbe, a nursing mother, and her colleague were seen in a video uploaded on You Tube, last week, extorting N100 from a commercial bus driver along the Apapa-Oshodi expressway.

The video went viral, receiving over 40,000 hits on You Tube within one week. Both officers were attached to the State Traffic Unit, Makinde Police Station, Oshodi.