Wake Up Ghanaians -'tribe' Is A Racist Word For Monkeys! 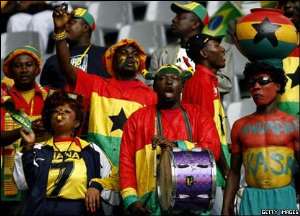 Wake up Ghanaians. The word 'tribe' is racist. 'Tribe' is both a noun and collective adjective used by the English only to describe a group of monkeys. In the same vain one will say: a flock of birds, a class of students, an army of soldiers, a choir of singers, a crew of sailors, a band of musicians and a gang of thieves.

It is more accurate to collectively describe all human groups as: nations, people, communities, nationalities, countries, or even clans and 'ethnicities' (this word is also dodgy).

Note, Europeans hardly describe themselves as 'tribes'. Yes sometimes the English refer to either the Irish or the Scottish as clans or tribes, but this carries the same level of colonial co condescension I am pointing out to you to resist here.

Mainly they reserve put-down words to describe Africans and 'other' people of colour as: tribes, niggers, coloured, black, aborigines (tree-living people), etc. We are all minded of the racial hierarchy which still exists in Apartheid South Africa. Unfortunately these racist terms are still used there. Note also that they describe our Kings as 'chiefs' - while theirs are 'Kings'. You catch my drift now?

After 500 years of Imperialism, the European Slave Trade and political colonisation that started with the Partitioning of Africa in 1883-4, Africans shamefully continue to ape European cultural (education, religion, birth, marriage and death customs), social (dressing, fashion, hair, skin, food, cars, TV, DVD and class system), economic (IMF/World Bank Structural Adjustment Programme - while the West thieves our oil, gold, cocoa and diamonds in day-time robbery), political (parliamentary procedures - "Point of order!!", "Honourable this and that" - corruption), Legal (wearing of dirty and sweaty white wigs which Europeans adopted to ape Africans in the first place - and the use of legalese to bamboozle us), etc.

So be critically alert. Check the linguistic origin (etymology) of contentious words before using them naively. Check your own involvement in aping European culture and other such behavior.

If in doubt check your dictionary, thesaurus, encyclopedia - or even Google words up.