Work And Happiness: How Prez. Mahama Can Be Remembered Forever 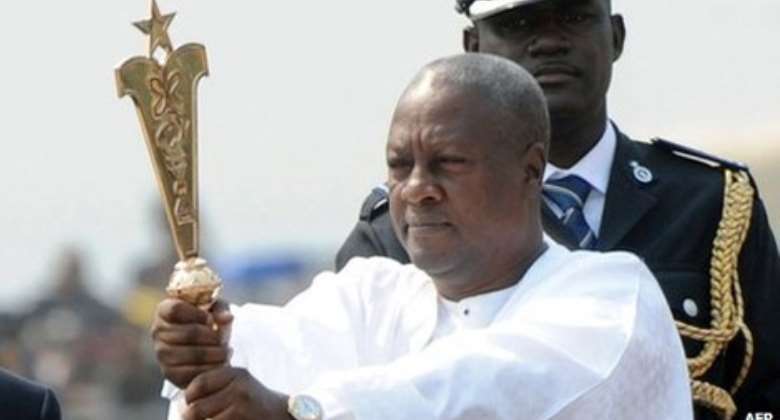 Henry Ford was the American who single-handedly created the Ford automobile empire. From all accounts, he was not kind to his workers. But he said something I agree with:

"There is Joy in Work. There is no Happiness Except in the Realisation that WE Have Accomplished Something"

I always pinch myself when I hear all kinds of excuses why Ghana/Africa cannot reverse its reputation as a poor, depressing back-water of technological and scientific backwardness.

I disagree vehemently with this attitude, because I know that the solution to our poverty and dependency to the west and east, are in our own hands. Shakespeare writes in, Julius Caesar, "The fault, my dear Brutus, is not in our stars but in ourselves"!

The economic picture in Ghana, despite all the fancy IMF-SAP-defined terminologies that now confound economists, amount to no more than illlsory. Many recent examples of sectoral underperformances abound.

Recently it came to light that Newmont Ghana (Ahafo Mine) paid little tax on its lucrative gold exports. Although it has stated that it paid, GH¢73,229,446 (US$ 37,800,199) to the Large Taxpayer Office of the Ghana Revenue Authority (GRA), that figure is still extremely low for its purported export earnings. Figures released by the Central Bank on the banking sector reveal that for the first six months of 2013 the industry's growth in profit after tax has declined significantly. Its net profit after tax of GH¢606.5 million saw a growth of 46.7 percent in June 2013 compared with 74.9 percent growth in June 2012.

July 31, 2013 shows that many banks make interest rate spreads of over 20 percent and in some cases these reach as high as 25 percent. However base lending rates, which are the rates charged by each bank on loans given to their most favored customers, range between 10.61 percent, charged by Bank of Baroda and 26.55 percent demanded by Fidelity Bank.

Ghana's poultry sector has been on the decline and can now handle about 10 percent of total poultry demand in the country. This is primarily due to the high cost of production (feed, drugs), inefficient production methods, limited knowledge of modern poultry management and the lack of processing facilities. Energy prices continue to increase production costs by over 60 percent.

These are the reasons why I call upon Pres. Mahama to assert himself and make history. I call on him as the current leader of our nation, to address Ghana's economic, scientific and technological under-development and continued dependency on, and exploitation by the west.

For the umpteenth time, I propose the following sustainable, intelligent, self-reliant, patriotic solutions, which I believe will reverse our economic insolvency if implemented. It is in Ghana's self-interest to have a leadership that is self-confident, assertive and fearless to do what is right in our self-interest.

Ghana has gold, oil, bauxite manganese, diamond, cocoa and an endless list of commodities resources and industrial plants. After thirty one years, it is time to part ways with the IMF-SAP bankrupting programme and implement our own development and modernisation policy without the west looking over our shoulders. We must end all relationships with the IMF-World Bank. We must define and implement our own programmes of develop.

The IMF-SAP, the World Bank and western Trans-National Corporations have forced successive governments, since JJ Rawlings in 1983, to sell out our key economic sectors wholesale. There is absolutely no sense in this. Therefore I propose the following measures to gain us the quickest route to industrialization and a good standard of living for all Ghanaians.

Pres. Mahama is way younger than Pres. Mugabe of Zimbabwe. So what is he afraid of? Has he not got more youth, effervescence and geo-political advantage than Mugabe has? Has Ghana not got more natural resources than Zimbabwe, with which it can broker the necessary funds with China and other amenable countries to secure the massive levels of funds to invest in a comprehensive science and technology-led Development and Modernisation Programme? What is he waiting for?

Pres. Mahama must boldly to stand up against the current deleterious economic relationship with the west. Ghana must nationalize its key economic sectors to fund a 10-15 year Development and Modernization Programme (DMP). He must not fear a thing anymore than Pres. Mugabe of Zimbabwe fears the west. We all know Zimbabwe's economy is blossoming.

3) Mobilise all sectors of Ghana's population - without age or gender biases - into serious work.

If Henry Ford or many like him had sat on their behinds waiting for some foreign power - England - to industrialise America, they would have been waiting forever. He did not do so, because he understood there is indeed Joy in Work. Ghana has not even dared implementing a Development and Modernisation Programme since Dr. Nkrumah launched his five-Year and Seven-Year Development programmes. Is it any wonder we are still grappling with failure despite our huge commodity export resources? We must be the laughing stock of the world of development!

SIR, YOU NEED NOT FEAR DYING LIKE GADAFFI. PS START THE DMP PLAN FOR FUTURE GENERATIONS TO FINISH. WE WILL REMEMBER YOU FOREVER - LIKE WE REMEMBER DR. NKRUMAH!!!