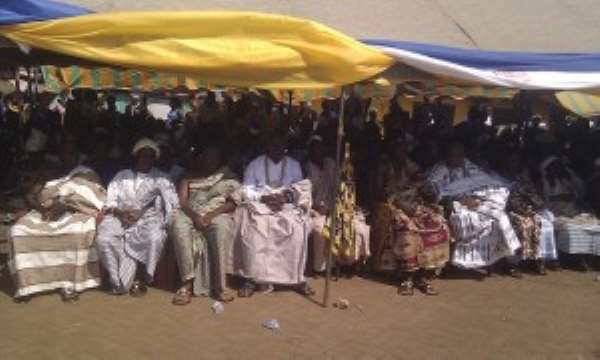 The newly-installed Queenmother of Nkrukan, a farming community in the Yilo Krobo Municipality of the Eastern Region, Manye Dedeyoo Ahudey I, has reiterated her commitment towards the empowerment of the girl-child in the area.

The 35 year old business woman, who is married with two children, became Queenmother after the death of Manye Georgina Ablah Ansah I, her predecessor, some three years ago.

According to her, most young females in the area had fallen prey to men because of the lack of sustainable employment, leading to unwanted pregnancies and school drop-outs among others, On tackling the 'curses' of teenage pregnancy, massive drop-out of school by the girl-child and social vices confronting the socio-economic development of the commercial town, the Queenmother suggested the empowerment of the girl-child through skills training and education.

She made the disclosure during the installation ceremony, which was attended by the traditional leaders within and around the area, at the Nkrukan market square, which is the largest revenue generating market in the municipality, over the weekend.

Others, who graced the occasion, included the Municipal Chief Executive (MCE) of the Yilo Krobo Assembly, Andrews Sodah, the clergy, and other very important people in the area.

Manye Ahudey I stressed that education was, no doubt, the pivot around which the socio-economic development of every society revolves, and to this end, would use her position to encourage the girl-child to take education serious.

http://thechronicle.com.gh/wp-content/uploads/2013/09/210.jpg The Nkrukan Queenmother contended that this, if done, would not only make education an indispensable tool for creating a level of enlightenment, promoting social interaction, and sense of wellbeing, but also provide knowledge to harness the economic potentials of the place and girl-child.

Andrews Sodah, in his speech, re-echoed the need for residents, particularly, natives of Kroboland, to make the education of their wards a priority.

Andrews Sodah mentioned that the establishment of the Eastern University on Kroboland should be a tonic to encourage and drum home the need for Krobos to invest to the education of their wards.

According to him, if the people of Kroboland failed to invest in the education of their wards, he would be the last person to listen to anybody who comes to his office for protocol admission when the university is established and starts full operations.

He averred that the people of Krobo should have themselves to blame if the unlikely event that Krobos did not get admission to the yet to be established Eastern University, which would be situated in the area.

On peace and unity, the Yilo Krobo MCE called on the people to be united, since unity and peace were prerequisite tools for accelerated socio-economic development.

His call for unity and peace was because the Krobo State, made up of the Yilo, Lower and Upper Manya Krobo Municipal and District assemblies, was starved of development, following their inability to give unity and peace a chance.

But the MCE assured the gathering that despite acknowledging that that in every human institution there were one or two who would always oppose the development of the institution, his office and that of sister assemblies were working tirelessly to put their differences behind them.

He disclosed that despite the fact that Krobos were the minority group in the Eastern Region, he had observed with great regret that they use the media to address their problems, which, in many cases, had led to division among them.

He, therefore, pledged to the Queenmother the commitment of his office to join her in the bid to improve the living standard of the people in the area, most especially, the youth, who are the future leaders.