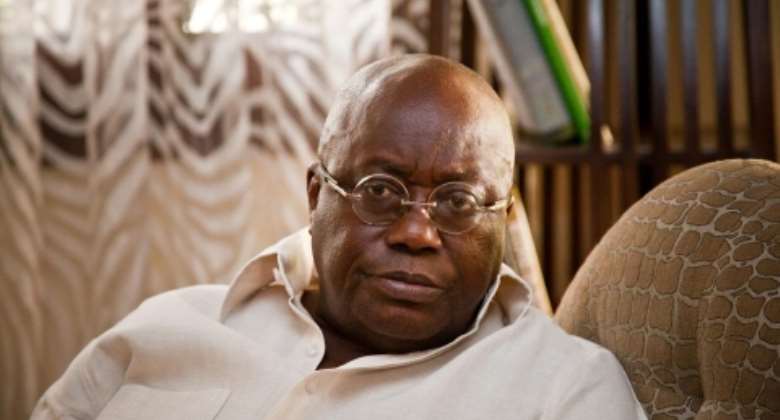 Kwame Okoampa-Ahoofe, Jr., Ph.D's. (Pee Aaach Dee) recent post in Ghanaweb.com (Okyeman Must Secede!!!, Feature Article, ghanaweb.com, 1 August 2013) is the kind of dangerous Mate Me Ho secessionist talk that could one day be construed as contributing to fanning ethnic genocide and crimes against humanity in Ghana. Is he losing his mind?

This post aims to engage and defuse the potency of, Kwame Okoampa-Ahoofe's secessionist statement, by exposing his literary quixoticism (his misguided, romantic, fanciful fights against windmills like Don Quixote did in the Spanish novel by Miguel de Cervantes Saavedra, who decides to revive chivalry). For, it is my view that he has hit the Grecian wall of hubris - tragic arrogance that causes him to feel an overbearing, head-in-the-sand pride and invincibility. This makes him say whatever he pleases without due care for its impact on national cohesion. No one is invisible.

Owing to personal and professional propriety - because we both feature write for Ghanaweb.com - I have stopped myself from commenting on his many disturbing posts. However, I must rebut his latest dangerous assertions. This issue is of grievous national importance. He has posted far too many malignant posts to be ignored. Example, he recently posted factually inaccurate, extremely insulting comments to poison and foul the air against the good name of Dr. Kwame Nkrumah - adjudged the best millennium African leader ever (Nkrumah Supported Apartheid Economically, Columnist: Kwame Okoampa-Ahoofe, Jr., Ph.D., Ghanaweb.com, 20 July 2013).

Typically Kwame Okoampa-Ahoofe 's post is extremely wayward. It is badly structured and argued, lazy, hyper-emotive, incoherent, self-indulgent, unpatriotic, capricious and recklessly secessionist. The thrust of what he says are in these quotes. I will quote and debunk them summarily.

Firstly he states: 'As I write this, my face is surfused [sic] with tears...for Okyeman and Akyemfuo/Okyemfuo to amicably declare a parting of the ways with the rest of this bogus corporate political entity called Ghana...For we are the most reviled and detested among all Ghanaian ethnic and sub-ethnic polities...'

Is he seriously saying to his compatriots whom he refers to: 'this bogus corporate political entity called Ghana,' that because the mayor of Accra unsuccessfully attempted to rename the hockey stadium after the late Pres. Mill, rather than, Auntie Theodosia Asihene-Okoh (who excellently designed Ghana's national flag) that 'Okyeman and Akyemfuo/Okyemfuo' must 'amicably declare a parting of the ways' - ie: secede from the rest of Ghana to lurch us retrogressively to the dangerous days of the Mate Me ho-NLR/NLM public violence - amidst bombs, shootings, knifings and such gratuitous violence? Is he not pacified by the fact that, Auntie Theodosia Asihene-Okoh, has accepted Pres. Mahama's apology and forgotten the matter?

Is he having Ghana on or what? Such rash illogical utterances defy all cognitive analysis. What pugwash are we being told so boldly - in these heady days of highly sensitive, politicised Election Petition - that the good people of Akyem must separate from Ghana because one of them has been disrespected? Does he realise the extent and limits of responsible journalism? Does he fully understand his ranting will possibly add to plunging Ghana into ethnic conflict?

Or is he simply trying to be a sort of precarious national anti-hero like Kenneth Kurankyie (Editor of the Daily Searchlight Newspaper) and Kennedy Agyapong (insufferable, foul-mouthed NPP MP)? If his wits have deserted (while he is still on sabbatical in Ghana from the USA) then he should sleep a lot more than he writes without thinking. For, he may have been plagued by some rather intractable demons!

Secondly he states: 'Were the New Patriotic Party to be ruling the proverbial roost, what happened to Auntie Theodosia Asihene-Okoh would not have happened.' There is no evidence to support this assertion. The NPP enforced a lot of politically unsavoury and anti-development acts which fly in the face of the above statement.

They wrongfully persecuted Tsatsu Tsikata (the man who patriotically drew and tweaked corporate and technical laws to efficaciously gain Ghana the foreign technical investment that has made us an oil power in west Africa (read: Sam Jonah: Tsatsu deserves honours for Ghana's oil discovery, July 22, 2013, http://edition.radioxyzonline.com/pages/news/07222013-1916/13439.stm). It is ironic that, out of political spite, the NPP threw Tsikata in jail and sold Ghana's oil to its local backers and western Trans-national Corporations.

The NPP turned a blind eye to the upsurge of cocaine. Even the CIA stated that the NPP had invested cocaine money in their 2008 election campaign. They derelictly under-developed the Central, Brong Ahafo, Northern and Upper regions in sharp contrast to their pet regions (this might explain why the NPP was nationally punished in two subsequent elections). They rushed the sale of our oil and telecommunication sectors and whittled out Ghana Airway's asserts, etc. They also left huge debts for the current oil sector.

The Chief Executive Officer of the NPA, Alex Mould recently said the NPP BOST with a debt of about US$54 million which has crippled their operations: 'There were no stocks at the end of 2008. Rather there was a debt that was left that government owed because the strategic stock had been used over the period especially from 2007 to 2008.' (Blame NPP for a weak energy sector - NPA, Jul 30, 2013, http://citifmonline.com/index.php?id=1.1466612).

Will we have had the darling country we now have for him to call, 'this bogus corporate political entity called Ghana', if the affected people and regions I point to above had reacted like him - to seek secession? If Ghana is as bogus as he refers why does he keep holidaying here and not elsewhere?

Thirdly he states: 'But that such criminally brazen and public attempt should be made to so violently dishonor a 91-year-old woman whose only crime clearly appears to be that she is biologically related to three of Ghana's celebrated Big Six.'

This statement typifies what I have describes above as incoherent. There is no evidence in any media reportage I have read that states that the major of Accra said that he wanted to change the name of the hockey grounds because Auntie Theodosia Asihene-Okoh (as he so over-familiarly calls her now) 'is biologically related to three of Ghana's celebrated Big Six'? What kind of pregnant imagination is this?

It is also utterly mind-numbing for Ghanaians to understand the reasoning in his argument that the entire Akyem ethnic people must secede from Ghana, on the basis of his close affinity to her, and how pitiful he has felt because of the ill-advised disrespect meted to her by Major Dr. Alfred Oko Vanderpuije. This kind of reasoning is surreal, to say the least!

Okoampa-Ahoofe's weird reasoning here is not isolated. It is part of a general pattern of his strange reasoning. This is not helped by his off-putting, thesaurus-assisted, verbose writing style. While big words are perfectly acceptable in writing of a higher order, because they best capture the nuanced or inflected meaning a writer wishes to convey, they can also be overbearing and obtuse in the way of sense making. One must use them judiciously. Ahoofe's writing is often full of repetitive synonyms that are reflective of an incongruent, off-track thought pattern. This quote illustrates this:

'I fully back you on your remark that the justices on the Atuguba-presided panel, in the Kenneth Kuranchie contempt charge, may well have behaved like some schoolyard bullies, gratuitously craving rather than commanding the respect of their hapless victims. I personally remember a few bullies from St. Peter's Secondary School - PERSCO - that a couple of them strikingly resemble. And I am also quite certain that you remember a few from your secondary alma-mater; perhaps even from Akropong SALEM where you, my then junior, left me behind by one year, because of my GSTS "PASS-NO-WAY" common-entrance results.' (Cousin Atta-Akyea, Too Many Justices To Take On, Already! Okoampa-Ahoofe, Kwame, 28 July 2013, http://www.ghanaweb.com/GhanaHomePage/features/artikel.php?ID=280573).

We see here a very good case of someone whose wits has taken a detour around irrelevancies only to return to perch on an aspect of what he may have been saying. One is taxed to ask what some infantile 'pass-no-way' to GSTS has to do with the business of discoursing the Atubiga-Kurankyie jailing. Highly unconventional. It is also meet we question the relevance of his usual a-literary display of pompous synonym-riddled word peacockery? One can imagine this is definitely based on his unhealthy close affinity with his thesaurus!

Fourthly he states: 'Until very recently, that is within the past eighteen or twenty years, I had not known our consanguineal affinity, on my agnatic familial side to be that proximate. This too, I would learn from my mother shortly before her death in conversation.'

Here we see the full array of what I have been pointing out. If one understands a little good English, 'consanguineal', 'affinity', 'agnatic' and 'familial' all relate to the noun, 'family'. The point he confusedly makes is repeated in synonyms of 'family'. What is saddening is he is clearly oblivious of the needlessness of trying to be over impressive. No one of cultured learning will take this linguistic puppet show - it can be imagined only a literary simpleton somewhere will. I would also not use the adjective 'agnatic' in this list of self-indulgent and cacophonous synonyms. Because it implies his clan of Akyems inherit paternally rather than maternally. His mother could not have told him that!

To conclude, Kwame Okoampa-Ahoofe Pee Aach Dee, has only been in the US a relatively short time to be stylistically stringing after his name - 'Jr' and PHD. In Ghana one is simply called a 'Dr.' No fancy shoes! Thus foreboded, he must come down from his pretentious high horse to do the real business of committing what is left of his intellectual dignity to the real business of social, cultural, economic and political analytical commentary in the public arena.

He must use his obvious education to address the real issues of pedagogy (teaching science). It is not good enough stringing together synonyms, losing his train of thoughts midway in his many cheap posts, aggrandising himself as actual family member to every prominent Akyem (J.B. Dankwah, from Atta Akyia, Akufo-Addo to 'Auntie' Theodosia Asihene-Okoh) and writing anything he wants without appropriate self-awareness of critical, academic and journalistic accuracy.

He must watch his ethnic chauvinist rabble rousing - his secession comments. It may, as yet, drag him before The International Criminal Court (ICC) to be prosecuted for comments that can be construed to contributing to fanning ethnic genocide and crimes against humanity.

He must also be respectful of Dr. Nkrumah's unassailable contribution to Ghana's and African's liberation and development, without being so crass and repugnantly disrespectful both to his good name and family's dignity. Ghana is not only made up of the NPP and Akyems - it is for all Ghanaian political and ethnic groups. We must all think, write and contribute patriotically to national development and modernization. The we-versus-them, two-legs-good-four-legs-bad politicised Akan narratives must stop now! He must watch his bad English in the interim.

Savannah Region: Calm returns after conflict at Lukula
2 minutes ago

I will choose either Bagbin or Haruna Iddrisu as my running ...
53 minutes ago